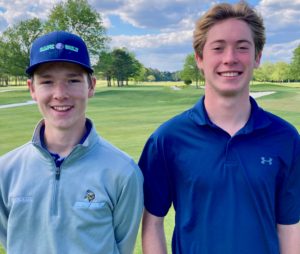 Zach Lingenfelter of Indian River won medalist honors with a 5-over par performance on the par-35 front nine. Cape’s Ethan Mercer and Quinn McCullough tied for best score among the visitors with a pair of 44s. Tom Burn shot a 49 for third best for Cape. Seth Reynolds and Dylan Steinwedel tied for the Vikings’ final scoring spot with their 54s.

On May 6 the Cape team traveled to Heritage Shores Golf Club in Bridgeville to face the Sussex Tech Ravens. The Vikings won 195-209, despite hitting several shots into the ponds.

Steinwedel’s 48 continued the improved play he showed with his 45 against Sussex Academy the day before. Burn made a 50 and Mercer finished the team scoring with his 51.

Mercer said he hit one ball into the water and that most of his other troubles came while putting.

Head coach Rob Harrod said Steinwedel was the “only one that played with the same ball all day.” Other golfers suffered “multiple” shots into the water on the same holes, he said.

Many golfing readers of this column can sympathize, having been there and done that.

The Vikings must now wait for their next move. May 15 is the last day for scholastic golf matches to be completed. Ninety-six golfers will be selected for the State tournament using the modified handicap system adopted for this season by the Delaware Interscholastic Athletic Association, in cooperation with the Delaware State Golf Association.

The Henlopen Conference Championship is on May 25 at Wild Quail near Camden, and the State tournament takes place June 1-2 at Maple Dale in Dover.

Baipor Khunsri led her Delaware State University women’s golf team to a team-best second place finish at the 2021 PGA Works Collegiate Championship, held May 3-5 at Ponte Vedre Beach, FL. She won the individual championship by five strokes with a 2 over par performance in the three-round tournament. Texas A&M-Corpus Christi won the team category by 28 strokes over the Hornets.

The First Annual Ace Cup, the Battle at the Beach, will bring together 12 juniors and their parents for three rounds of golf, group meals, and presentations to the players on Youth Leadership and Being Responsible Humans at the awards dinner on the closing evening.

Each year’s event will have a featured charity for the players to seek donations, selected by one of the players. Sawyer Brockstedt, the daughter of tournament founders Kelly and Chase Brockstedt, chose the Alzheimer’s Association in honor of a grandparent.

To join a player’s list of donors, go to http:// act.alz.org/goto/TheAceCup2021 and follow the prompts. You can also send checks payable to the Alzheimer’s Association to Sawyer Brockstedt, 19 Kings Creek Circle, Rehoboth Beach, DE 19971.

Forty golfers participated in the Kings Creek CC 18-Hole Ladies League Far Out game May 6, where none of the par 5 scores count.