The Cape Henlopen High golf team stumbled for a fourth loss of the season on May 6 against Sussex Tech, 172-188, at Rehoboth Beach CC. The Ravens’ William Burton won medalist honors with his 41. 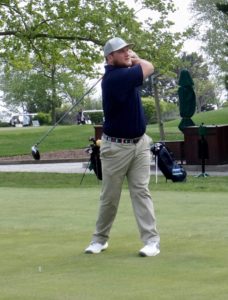 Jonah Robertson tees off during a recent match

Laurel High also played the match, but forfeited to Tech and Cape by using only three golfers.

Viking head coach Rob Harrod said, “No excuses, we just didn’t play well enough to beat the quality team that Tech brought. Individually there were some great holes, so I’m hoping the great scores come together for some great rounds in time for the conference and state tournaments.”

Spencer Frawley of Smyrna won medalist honors with his 40.

Kalb’s 43 was the best score for Cape, with Palmer two strokes back.

Nick Vitolo finished with a 48. Seth Reynolds played his first varsity match for Cape, completing the team scoring with his 53. 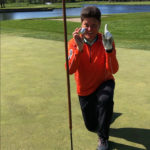 Congratulations to Kings Creek CC golfer Sheree Davis for her May 6 hole in one, made during the Delaware State Golf Association’s Pro-Am at Rehoboth Beach CC. She used a 5-hybrid on the 120-yard par-3 fifth.

Not the only ones on the golf course

The May 2 edition of Golf Advisor featured an article by Bradley S. Klein about pace of play issues being studied by the United States Golf Association.

Klein noted that customer satisfaction surveys of public course golfers show that pace of play is one of the two most important considerations for them, along with course conditioning.

Slow play erodes players’ satisfaction and can affect the chances for repeat business. The challenge is how to reduce dawdling without resorting to harassment by rangers, which creates its own customer service problems.

Klein suggested more diplomacy might help, along with encouraging play from shorter tees.

Some folks definitely need reminding that they are not the only ones on the golf course.

We played behind four gentlemen recently, and watched how the golfers in one cart reacted to hitting tee shots into water on both sides of a short par 4.

The two men drove toward the pond on the right side. One pulled out a ball retriever, and in a couple minutes found a ball. The other man then stepped out of the cart and hit the ball.

They then drove over to the left rough and parked. One walked to the back of the cart, pulled out the ball retriever, and eventually found a ball either in the water or near enough to it to convince him to improve his lie by moving the ball to a better spot. He then walked back to the cart, pulled out a club, walked back to the ball, took a few practice strokes, and finally hit his ball. I don’t think it reached the green.

This bit of nonsense added five or more minutes to the playing time on this one hole. Splitting up to play these shots would have cut that delay by 80% or more. Similar mucking about on other holes can easily add an extra hour to playing time, not only for that foursome but also for every group behind them.

In the future I will make some tactful personal attempts to alleviate this situation, instead of stewing about it as I did this time. I hope more Cape Region golfers do the same – diplomatically, of course.

A local golf pro told me about another etiquette issue. During a recent tournament, a golfer from an adjacent hole hit into the pro’s fairway. The player walked to his ball in front of the pro, took several practice strokes, and hit it back toward his hole.

At no time did that golfer appreciate that he didn’t have the “right of way.” He should have waited for the pro and his cart mate to play first, or at least asked the other golfers before interrupting their game.

The Mulligans Pointe Ladies golf group played a Criers game May 7, in which the worst three holes’ scores are subtracted from the total.

The Kings Creek CC LGA 18-Hole played a Far-Out game May 2, where the par 5 scores are not counted toward the total.

Gale DiBona won first place in the first flight, with Jennifer Falcone in second and Sheree Davis in third.

Arlyce Dubbin won the third flight, with Carol Loewen in second and Sheree Mixell in third. Ana Dittel won closest to the pin.