JoAnna Keck, who plays for James Madison University, won the overall championship with a two-round total of 166. Sawyer Brockstedt of Rehoboth Beach and Kings Creek Country Club won the championship flight with her 168. Sue Bennett of Cripple Creek Country Club won the first flight. Sue Bardsley of Milton, a member of The Rookery, won the second flight. 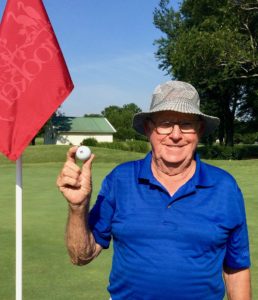 Abe Ellison of Milford made his ninth ace

Congratulations to Milford golfer Abe Ellison for his ninth hole in one, made June 28 on the 105-yard par 3 ninth at The Rookery South. He used an 8-iron for his ace.


I played golf with a caddie at Pebble Beach and at Pebble’s sister course, The Links at Spanish Bay.

I enjoyed the experience very much. The caddies had loads of course knowledge and coached me along to play better than I would have played without them.

If you pay attention during your regular rounds, you essentially caddie yourself. You typically know the course you’re playing, and you should know your distances and tendencies. If you keep those elements in mind, and don’t vary too much from a pre-round plan of attack, you should have a good time.

The Hello Birdie game-planning app fits somewhere in between.

At the 2019 PGA Merchandise Show in Orlando I met founder/CEO Damien Cuillery and his media person, Olivier Poul. The enthusiastic Frenchmen began the meeting with some funny and snide remarks about last year’s Ryder Cup results in Paris. The banter continued during a very pleasant conversation. 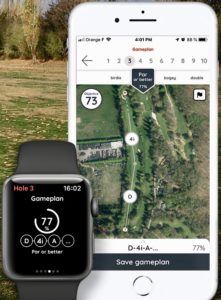 Hello Birdie includes a GPS tracer that, when combined with input of club choices during or after the round, allows the software to develop a personal profile of the elements of your game. Using a database of over 40,000 courses, the app then queries you as you pre-plan an upcoming round.

You tell the system whether and how much you want to play aggressively or defensively. Based on those choices, your handicap, and the playing data, the app then suggests how to play each hole.

As you keep playing rounds, the artificial intelligence built into the system takes note of your skill levels as they change, and alters the game planning accordingly. If you are unable or uninterested in keeping your smart phone on during the round, you can print out the game playing advice beforehand and keep the printed notes handy.

It is truly a virtual caddie, and the demonstration Cuillery showed me was impressive.

I liked two other elements of Hello Birdie. One is the price, a reasonable $69 per year for a full subscription to all of the courses in the database. For $49 per year you can limit the number of courses to which you will access, and then add more layouts at $5 per course.

The app currently works with the Apple IOS for smart phones or smart watches, but Cuillery said they expect to issue an Android version.

I especially loved the catchphrase embroidered on the front of their caps: “Hope is Not a Strategy.”

That is a great phrase for golf and the other important parts of your life.

The new app can help instill some useful hope, however, by giving golfers a realistic personal assessment coupled with strategic advice for a better round of golf.

That’s just what a good caddie can do.

The Kings Creek Ladies 9-Hole league played an individual Odd In/Even Out game June 26. In this format, only net scores for odd-numbered holes were counted.

The Kings Creek Ladies 18-Hole league played their version of Odd Out/Even In on June 27. Wendy Bunce won first place in the first flight, with Donna Deely in second and Gale DiBona in third.

Susan Underwood won the fourth flight, with Yona Zucker in second and Prabha Karapurkar in third. Carol Simon was closest to the pin.