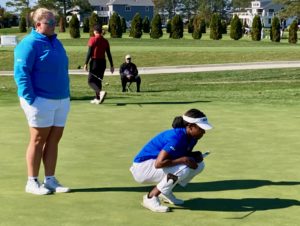 Christina Carroll of the University of Delaware lines up a putt during the first round of the 2022 Blue Hen Invitational at Rehoboth Beach CC. UD Assistant Coach Jackie Mullens observes.

Big Green golfer Sophie Thai won medalist honors with her 6-under par performance in the 54-hole contest on the 6,169 yard, par-72 course. She posted a 69 and 72 on the 36-hole first day and went 3-under again in the 18-hole Sunday final round. Bridget Hoang, competing as an individual for the Naval Academy, came in second at one-under par.

Congratulations to Delaware State University’s Ana Ferreyra-Heit for her recent designation as the Northeast Conference Co-Golfer of the Month for her competitive record in September.

The Hornet golf team leader and graduate student posted high finishes in the three tournaments in which she competed, with an average score of 73.5 per round.

As noted in the Sept. 30 column, Ferreyra-Heit won medalist honors in Delaware State’s Classic at the Creek invitational at Kings Creek Country Club Sept. 19-20 with a three-day score of 219 and after a four-hole playoff.

At big time golf events several attractions are usually in place to help keep up fan interest on the site in addition to the action on the course.

Last August’s BMW Championship at Wilmington Country Club was no different. In this case, however, the tournament’s prime beneficiary, the Evans Scholar Program of the Western Golf Association provided its own special spot on the property for those who want to support it.

At the Caddie Yard next to the main merchandise tent, several golf companies provided small displays, complete with QR codes for potential customers. The net proceeds from these sales went to the Scholarship Fund. 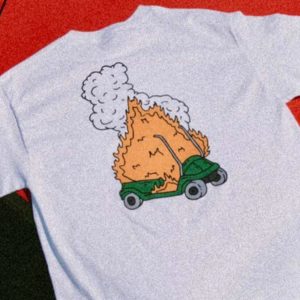 I spoke with Christian Hafer, a golf photojournalist and co-creator of one of the participants – the Burning Cart Society.

The Society “started out as a joke,” he said. Hafer and some of his friends were chatting about their keen interest in golf and their decided disinterest in some of its modern-day elements. That led to the creation of the Society’s distinctive logo, a golf cart on fire.

The creation of the logo helped inspire the decision to use it to decorate shirts and other items featuring the design.

Hafer said one of the Society’s first successful forays into the golf apparel business took place during the Covid crisis, at a caddie fundraiser held at the Bandon Dunes resort in Oregon. That success led to creating more designs. For example, one tee shirt displayed at the BMW featured a semi-staggering caddie lugging a bag full of clubs.

Hafer’s wife Lindsay was instrumental in developing the Society’s apparel options for women. One tee shirt features an 800 number with the phrase Caddie Relations, but it’s not what you might think. The number takes the caller directly to the Evans Program.

To avoid the costs of maintaining inventory, the Society uses the drop shipping method to make its sales. For more information, go to https://www.instagram.com/burningcartsociety/?hl=en.

My brothers Dave and Tom and I played a fun round of golf Oct. 9 on the Blue Heron course at Ford’s Colony near Williamsburg, VA.

The Dan Maples design wound through hilly terrain, something you don’t experience in the Cape Region.

By early October there were enough cold nights to cause this hot-weather-loving grass to begin going dormant. That process created what I can best describe as a hard, crusty surface. Several approach shots bounced harder than expected. Even more bounces happened during our putts.

I’m sure these greens are great in the summer – but if we had a swear jar during our round, it might have filled up.