Esther Park of Wilmington, DE won the Robert McCurry Award, named after a founder of the Fund and a great friend of junior golf. She will receive $6,000 for the first year, up to $24,000 total, and attend Georgetown University.

Dane Palmer of Lewes and William Starnes of Tyler Mayhew of Middletown, DE tied for the James Powell Award. Each will receive $4,000 for the first year, up to $16,000 total. Starnes is heading to Penn State, while Palmer is going to James Madison University.

Kaden Kinard of New Castle and Jack Stosic of Newark, DE tied for the R. Gerald Medd award. Each will receive $2,000 for the first year, up to $8,000 total. Kinard will attend Catholic University in Washington, D.C., and Stosic will go to Penn State. 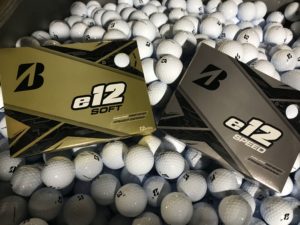 Bridgestone Golf returned to the PGA Merchandise Show in Orlando, FL in January 2019 because it had something very new to announce.

Marketing manager Elliott Mellow said, “We’re happy to be back. We need to be here.”

The name for the company’s new E12 golf ball came from the development process for it. “It represents 12 years of study, with over 2.5 million swings analyzed,” Mellow said. “We think we can revitalize the distance ball category with our new design.”

He showed me two primary innovations. First, the mantle layer of the three-piece ball, between the core and the cover, is made of a far denser polymer. This Active Acceleration element provides “adds thrust at impact that combines with a softer core for more forgiveness,” he said. “And that comes at a mid-price point [$29.99].”

The ball also features a Delta Wing Dimple pattern, which resembles a honeycomb instead of the usual round indents. Mellow said the design’s sharper edges create more turbulence, which reduces aerodynamic drag and promotes a longer flight.

It’s not likely that this Surlyn-covered golf ball will out-spin urethane-coated balls in the higher price category. However, Mellow said the E12 should appeal to players who prefer to make “hit and stop” shots to the green.

He has a point. What’s the use of making the ball spin backwards on impact with the green if that impact is not past the hole in the first place? Why not try to hit as close to the hole as possible, knowing that the ball should stop quickly upon landing?

I also took Bridgestone’s new ball-fitting challenge. The company set up a test center at the Convention Center and is taking it on the road during the season.

I hit drives, 8-irons, and wedges into a net. A GC Quad launch monitor recorded the results with my usual TaylorMade Project (A) ball and Bridgestone Tour B RXS, aimed at those with driver speeds below 105 mph.

Mellow said Bridgestone’s models are preferred in these tests by about 75% to 25%. In my case, there was some sidespin improvement with the Bridgestone ball, and I am now doing some real-life testing.

July 8 is the deadline for entering the 12thPinky Returns Golf Tournament and After-Party, held July 29 at Kings Creek Country Club.

The event supports the Julie Dickson Foundation, aimed at helping women and girls with academics, business pursuits, and athletics. Helene Guilfoy set up the foundation in memory of her wife. “Julie truly was a selfless champion of women, and the Foundation is focused on helping empower women and girls to excel and succeed,” Guilfoy said.

To register for play or as a Friend of Golfers (FOG), or for more information, go to juliedicksonfoundation.org.

Tournament organizers are seeking sponsors as well as players. Sponsorship opportunities range from Hole ($100) to the Gold level ($3,000). The player fee of $100 covers green fees, cart, breakfast, refreshments on course, range time, and the awards reception with lunch. Silent auction items will also be available.