The cut line stood at one under par after the first two rounds of the 2021 ShopRite LPGA Classic. Nine golfers, a mix of veterans and relative newbies, were in the just-made-it bunch.

I followed three of them as they began their final round on the 10th tee. Good stories are everywhere.

Spanish golfer Luna Sobron Galmes joined the LPGA in 2018. The 27-year-old’s best 2021 finish was a T-22 at the LOTTE Championship in April.

Charley Hull, 25, has a reputation for fast play, booming drives, and as a competitive 5-time Solheim Cup player. The English golfer won the 2016 CME Group Tour Championship for her only LPGA win.

Mo Martin, 39, is a short-hitting veteran. Her sole LPGA victory was the 2014 RICOH Women’s British Open at Royal Birkdale. 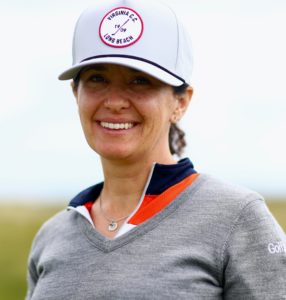 Martin has recently been plagued with injuries. The pandemic hadn’t helped, either. She has only played a few tournaments in the last two seasons.

Martin rose to the occasion.

Her first birdie of the day came on 12 with a 100-yard approach from the center of the fairway to 15 feet. The one-putt finish inspired “Go Mo!” chants.

On the uphill 13th, Martin’s drive was 30 yards short of Hull and 23 yards short of Galmes. Nonetheless, she hit the best approach to 10 feet, followed by a nice birdie putt.

Hull missed the green pin high in the rough and made bogey.

The English golfer’s 307-yard drive on the 419-yard 14th perhaps reflected her prior hole’s disappointment. Unfortunately, a lip-out putt from 3 feet led to another bogey.

Martin’s approach from the fairway center 178 yards out finished 18 feet from the hole for a two-putt par.

After several routine pars, the players lit up the short par-5 18th hole. Martin chipped in for eagle from the fringe short of the green. Galmes made an eagle with a 50-foot cross-green putt. Hull calmly rolled in a 7-foot putt for a third eagle, leading to wild cheers.

Martin continued her down-the-middle, hit-greens, make-putts approach, marred only by a bogey on the long par 4 second hole. Galmes bogeyed the first and second, while Hull bogeyed the first.

Martin again outplayed her competitors on the short par 4 fifth.

Galmes’ shot from the right rough landed well past the hole. Hull’s approach also finished 30 feet past the pin. Both made par. In contrast, Martin’s low-trajectory, high-spinning approach stopped about 2 feet away for an easy birdie.

Hull and Martin parred in from there. Galmes bogeyed 6 and 7, birdied 8 and 9, and finished 3-under for the tournament. Hull was one-under for the round, 2-under total.

Martin burst out laughing when I suggested she proved experience and guile can overcome youthful exuberance.

“It was hard overcoming a year and a half of injury and then COVID and just to be benched for a while. I feel like I’m finally getting my legs back, and just that competitive edge, that sharpness of focus, and your mind and your body coming back. I actually was thinking 66 today. I haven’t had that in a little while,” she said.

She called the group’s eagles on 18 “bananas,” and then discussed the Bay Course.

“I love this place. I’m so glad it hasn’t changed much. This golf course is pretty demanding. You have to hit some good shots, you have to be in the right places on the greens, and so, even though it isn’t intimidating yardage wise, you can have some giants fall.”

I asked if the mowing pattern that visually split the fairways in half helped her.

“I like the way they cut it because I did use that cut line for [aiming],” Martin said. “Sometimes you have to get that center cut because the fairway moves. This is something I really liked about Royal Birkdale when I won there. There are a lot of subtleties that shift but they make the difference between the fairway and green, and the difference between a birdie putt and scrambling for bogey.”

We also discussed her injury challenges. “It was just my back that’s been the problem. So that was quite the journey to overcome, but I’m just really glad to be back,” Martin said.

“[I’ve had a] lot of treatment. More needles than I ever care to see again. Cortisone and a bunch of stuff. More than I can tell right now,” she said.