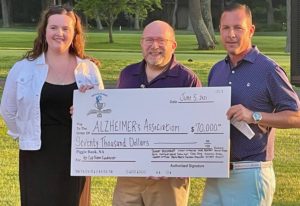 Maggie Shope, Phil Gottis, and Chase Brockstedt with a $70,000 check for the Alzheimer’s Association

Twelve talented young women golfers came to the Cape Region June 3-5 to play the first Ace Cup/Battle at the Beach golf tournament. They brought not only their golf clubs, but also thousands of dollars of donations for the Alzheimer’s Association.

The tournament was the brainchild of three sets of parents of girls who often met and played together at national and regional junior contests. About 18 months ago, Eric and Susie Lundquist, Andrew and Ellen Barber, and Chase and Kelly Brockstedt began chatting about holding their own junior event. They decided to emphasize creating a fun competition and asking the golfers to raise funds for a worthy non-profit recipient as part of the event.

Kelly Brockstedt and her husband Chase agreed to host the first Ace Cup. In remarks during the evening award ceremony June 5, Chase credited Don Byerly, manager of Kings Creek Country Club, for his wholehearted support for the project.

The Kings Creek CC golf professionals were also happy to help. Head pro Kevin Wiest assigned assistant pro Eric Willey to oversee the competition. Willey said the girls’ play was “awesome,” noting that they made more than a dozen birdies during the three competition rounds.

Phil Gottis, a board member for the Delaware Valley chapter of the Alzheimer’s Association, came to the gathering with Maggie Shope, constituent events manager for the association’s Philadelphia office. They accepted a check for $70,000, representing the money raised by the girls in the weeks leading up to the tournament. “We are blown away by your initiative,” Shope said.

Gottis said, “To see young leaders care makes a big impact.” Shope said the money will provide direct support for victims and their families, expand education and awareness programs, and support continuing efforts to improve treatment options and research for a cure.

The girls split into two teams for the tournament– Teal Tide and the StinGRAYs. The first session June 4 used a 4-ball format, with a point available for the front 9, back 9, and total. The second session that afternoon was a 9-hole alternate shot contest, with 6 points available. The final competition took place June 5 was a standard singles match-play format, worth 18 points for front, back, and overall.

Whoever did the seeding did a great job of keeping it competitive, with the Teal Tide team earning a 17-16 victory.

Sawyer Brockstedt chose this year’s donation recipient, honoring a grandparent currently under treatment for the condition. Her father Chase said, “This disease touched our family.” He also noted receiving “so many calls, texts, and messages” from donors about their own families’ experience. “This disease touches everyone in some ways,” he said.

Brockstedt gave thanks to the other parents, his wife Kelly, the Kings Creek CC staff, the Big Fish Restaurant Group, The Starboard Restaurant, and the Sea Voice accommodations in Rehoboth Beach.

“The rigors of junior golf are not for the faint of heart,” Brockstedt said. Despite those challenges, he said the friendships and relationships the junior golfers make are “for a lifetime.”

He also told the golfers, “This is about making a change, using your skills for a purpose.”

Participants will learn about First Tee and its Life Skills Experience on-the-Golf Course Program. First Tee staff will also discuss the organization’s other programs in Southern Delaware, including school events and coordinated activities with the Boys and Girls Club in Sussex County.