Four under par the hard way

The Bay Course set-up at the Seaview Resort for the ShopRite LPGA Classic is predominately a mix of the long and the short. There are not many holes that the players might consider a mid-length challenge.

In contrast, none of the three par 5s are long. Most players can reach the greens in two shots, depending on wind conditions. At this year’s tournament the par 5s ranked as the three easiest holes, with scoring averages ranging from 4.2 to 4.6.

But not all the time, and not for everybody.

During the first round, I followed LPGA veteran Caroline Masson along with Christina Kim and Pornanong Phatlum as they led off with their 7:10 a.m. tee time. 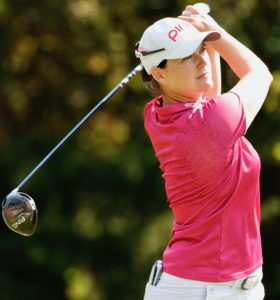 As is usually the case that early in the day, no crowds came to watch them play. Jason McDede was the only other person to join me. He is Masson’s fiancé and is also the longtime caddie for recent No. 1 golfer Nelly Korda, who had taken the week off.

Masson bogeyed the short par 4 first hole but immediately made up for it with a rare birdie from 20 feet on the 421-yard par 4 second.

The group played into the wind for the par 5 third hole, at 465 yards. Masson’s tee shot left her 245 yards away. Her third shot came from 80 yards out, finishing 25 feet above the hole. Her birdie putt came up a foot short, and she tapped in for par.

On the next par 5, the 477-yard ninth, Masson drive finished just over 220 yards from the green. Her second shot landed in the left rough pin high, but her chip shot came up 12 feet short. The first putt stopped inches from the hole, with another tap-in for par.

For the third and final par 5, the 507-yard 18th, Masson drove into the right rough about 220 yards out. She wedged out from the thick stuff to the fairway, 145 yards from the green center. Masson hit a fine approach to 20 feet below and left of the hole. Her birdie putt slid two feet past the spot, however, leading to yet another par.

Fortunately, she played other holes far better, in addition to the birdie on the long second hole.

For the short par 5 fifth hole at 301 yards, Masson laid up with something less than driver to a spot in the fairway center 121 yards away from the hole. Her approach landed 20 feet past the hole. The birdie putt she made from there looked like a bit of a surprise to her, but her fiancé applauded.

Masson also put her tee shot at the long par 3 11th hole on the green, about 15 feet short. She made that birdie putt look easy.

The German golfer also went against the grain on the challenging 419-yard par 4 14th hole. Her approach shot from the right rough from 150 yards out stopped on the green 6 feet below the hole. It was her easiest birdie of the day.

Bear in mind that the 14th was the 7th hardest hole of the tournament, averaging just over par.

Masson’s fifth birdie came on another hard hole. The uphill 198-yard par 3 15th ranked as the 4th hardest for the tournament. Her tee shot bounced and rolled from the right rough onto the green, pin high and seven feet away. Masson made it look easy.

Her four-under total put her in good shape to make the cut the next day. Masson parred the course in the second round, making a birdie, a par, and a bogey on the par 5s. In her last round, however, she birdied all three par 5s on her way to another 4-under round. Masson finished T-14, good for $24,421.

Golf has inspired a strong literary tradition to go with the physical and mental demands the sport requires. 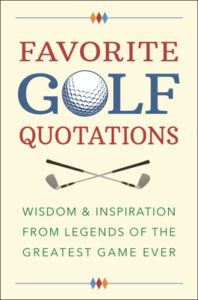 Publishing houses know this, and every year bring out new offerings both large and small in scope.

“Favorite Golf Quotations”, arranged by Jackie Corley, is one of those smaller books. It can be found locally through Browseabout Books in Rehoboth Beach ($12.50 SRP).

Corley compiled over 200 pithy sayings that will be very familiar to avid golfers who kept up with the game’s history.

Some are one-liners, such as Lee Travino’s “You can talk to a fade but a hook won’t listen.” Others aim for something a bit more profound, such as Bobby Jones’ admission: “I never learned anything from a match that I won.”

It is a pleasant quick read and a nice gift option for the upcoming holiday season.