Alice Dye is the wife and business partner of famous golf course architect Pete Dye, and an accomplished golfer and designer in her own right.

For example, she made the inspired recommendation to build the island green 17th hole at TPC Sawgrass, home of The Players Championship. Her contributions to the family business went much farther, however, especially in making sure the company’s designs presented a fair challenge to women.

Several years ago she wrote about the need to create a two tee system for women and, as she put it, “those players who are not as long off the tee.”

Dye pointed out several benefits to adopting this proposal, including increased playability, decreased playing time, and enhanced junior golfer experience. Using USGA guidance, she suggested yardage lengths for par 3s, 4s, and 5s that would give more short-hitting golfers a chance to reach the greens in regulation.

Two Rookery South teeing areas are in line with Dye’s essay. The Gold tees total 4,875 yards, and the Red/Gold hybrid layout totals 5,129 yards. Both sets of tee boxes see a lot of play from women, seniors, and juniors.

The Rookery North course’s new Gold tees went into play a few weeks ago, and they are already very well received. “The ladies love them,” said Brad Rouse, a pro shop staffer at the Milford layout. “They’ve increased their pace of play, and they don’t feel like they’re holding people up.”

Kyle Deas, the Rookery North head golf pro, said he heard from one lady, “’It’s nice I can actually now reach the fairways and par 3s on most holes.’” Another golfer, one of the 9-hole ladies’ group, told Deas she shot her career best from the new tees.

It’s not just for the women, either. Deas quoted an older gentleman who said, “I’m over 80 and now I have a set of tees I can play and have fun.” 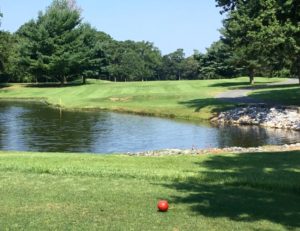 The Gold tee box sits on the other side of this pond, eliminating the risk of a wet golf ball when hitting from the Red tees on the 17th hole.

The new tee on the par-5 17th begins on the green side of the large pond, eliminating the dispiriting dump into water that can happen with tee shots from the Red/Green tees. The 15th hole’s Gold tee is 275 yards out, making it possible for golfers to hit the downslope of the fairway with their drive. The 12th hole is now 60 yards shorter, making it far easier to clear the trees on the inside of the left dogleg hole.

The yardage differences are milder for other holes, but the overall changes are already gaining wide acceptance.

“Last winter Kyle laid it out. Over the winter they stripped off the areas for the tee boxes and added soil where needed. They sodded them when the sod would take, earlier this spring. The tee boxes were playable in about four weeks,” he said. “The new tees are definitely speeding up play.”

Deas also believes the pace of play has improved. In addition, he noted the new tees created a side effect he hadn’t considered. He says more men are moving up to play the Red/Green tees.

That’s always been a good idea. The Rookery North course is fun from the shorter tees for most golfers, but also presents a good challenge for longer-hitting golfers from the back tees. This year’s Delaware Amateur used a mix of Blue and White tees. The winning score was 2-under par for 72 holes.

Playing the set of tees that match your abilities is the best way to enjoy a round of golf. The new Gold tees at Rookery North make this possible for many more golfers, and the folks who made this possible should be applauded.