Some keep their readers intrigued because the stories are so realistic, and yet just out of the ordinary. Tony Hillerman’s Navajo Tribal Police series, featuring Lieutenant Joe Leaphorn and Sergeant Jim Chee, are good examples.

Other murder mysteries keep their readers intrigued because of their sheer entertainment value as character studies. A realistic portrayal of the detective work that drives the plot line is of secondary interest at best. In these stories, the protagonists create the primary interest, and their human foibles are the main reason the pages keep turning. 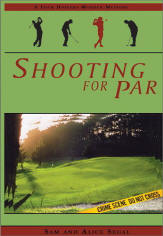 The story itself frequently requires the willing suspension of disbelief, especially for those readers with either legal or law enforcement experience. Nonetheless, the social comedy the Segals portray about golfers in the Hamptons of Long Island will keep the grins on their readers’ faces through the entire book.

The plot (such as it is) revolves around a disturbing trend concerning the last member of a foursome that plays a regular weekend round at the Accabonac Golf Club.

Julian Rosen is a retired classics professor, who picked up the game shortly before his early retirement from Princeton. He is now as smitten by a well-struck ball as he was by the works of Homer.

Robin Hardy, a boyhood friend of Julian’s, had a long career as a fashion photographer, after stints as a Navy boxer and fitness buff. At 57, he can boom the ball off the tee, but it’s anyone’s guess what will happen next. Jack Quinn is a practicing attorney who would much rather practice on the range than in the courts.

When we first meet the three men, they are trying to fit in a round of golf while attending the funeral service in Florida for their former foursome partner, Dr. Bobby Simon. Not long afterward, their group is filled out by new club member Steve Bonano, a businessman from New York City. The new arrangement doesn’t last for very long, however, as another death strikes the foursome.

And as they say, complications ensue.

The next foursome partner, Al Berke, is the son of another Hamptons resident whose fondest wish is that Al find a new life partner, not least of which for the sake of Al’s precocious young son. The club president’s youngest daughter is available, but her personality could be described as flighty at best on her good days. That’s not a major deterrent to Julian’s wife Liz or her friends, of course.

Meanwhile, the club president is worried that the untimely deaths of the club members will stand in the way of his plans for a major pro-am tournament involving Tiger Woods. His planning for the event is also complicated by the oleaginous personality of one of the club’s old-line WASP members, who seems to have the necessary connections but also a shady past.

The local detective overseeing the investigations, Jimmy Lo, is both circumspect and yet all too willing to take advantage of the amateur sleuthing by the remaining foursome members. After all, it’s perfectly natural that the Suffolk County police would allow these men to take the lead in figuring out what happened to their playing partners, isn’t it?

Well, no, not really—but then again, that’s one of the reasons why the book is so entertaining. This story would never happen in real life, but it is certainly fun to imagine how the friends’ various talents work together to solve the crimes.

There are additional entanglements along the way, of course, but this is a book review, not an edition of Cliff’s Notes.

Readers looking for a realistic description of a murder investigation should look elsewhere. On the other hand, those looking for diversion can easily while away an afternoon or two on the beach, enjoying the writers’ deft touch in describing the social mores of a certain segment of Long Island society.