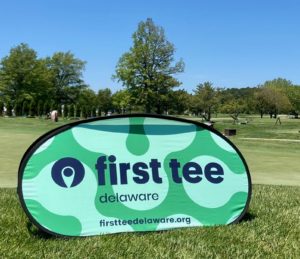 The First Tee of Delaware held its annual Delmarva Scramble Tournament June 6 at Rehoboth Beach Country Club, when bad weather forced a postponement from the original May 5 date.

The delay may have helped. PGA professional Scott Allen, the Senior Southern Delaware Coordinator for First Tee of Delaware, said the tournament, supplemented by an online auction, grossed over $56,000. That total was 40% more than the 2021 tournament and nearly five times the total raised in 2019.

Allen said, “The funds will all stay in Sussex County to help support our growth, which has been significant.”

In 2019 there were 15 children enrolled in a program at one golf course. By 2021, the First Tee reached 146 juniors at four courses, with additional programming at the Boys & Girls Clubs in Dagsboro and Georgetown.

Projections for 2022 call for over 250 children in the Life Skills programs at eight golf courses. The Rehoboth Boys & Girl Club will join its counterparts in Dagsboro and Georgetown, and three Indian River School District schools will also be involved.

The First Tee continues to need volunteer coaches to help run its programs. For more information about these opportunities, contact Allen at ScottTFTDE@gmail.com.

Campbell’s second-round 79 was eleven strokes better than his first round. However, he created even more excitement for himself that day than just his score.

On the par 5 sixteenth hole, Campbell’s tee shot landed in a fairway bunker on the right side, about 215 yards from the green. The ball sat about three feet from the bunker’s front edge. That edge featured a foot-high vertical wall between Campbell and the green.

I marshalled the hole during both rounds and stood a few yards from bunker, planning to rake the sand after he finished.

Campbell stepped down into the sand, glanced a little too briefly at the challenge facing him, and swung quickly.

The ball slammed into the bunker wall and shot straight up in the air, making a huge noise. Campbell staggered back as the ball spun high over his head. It fell back into the bunker a few feet right from where he stood.

As Campbell steadied himself for a second attempt, I said gently, “Looks like you just saw Jesus.”

“And God!,” he replied with some force.

A few seconds later, Campbell made a better choice about where to aim, cleared the bunker easily, and finished the hole with a bogey 6.

I expect next time he will be more careful.

The prospect of unexpected and potentially serious injury can do that to most people – even golfers.

Congratulations to the Cape Region golfers who earned All-State and/or Henlopen Conference honors for their performances during the spring season.

The Kings Creek CC Ladies 9-Hole group played a 3 clubs and a putter scramble game June 14. Players were limited to three of their own clubs with their putters, and no swapping was permitted among team members.

The same group played a team Cha Cha game June 9. This often means that one best net score counts on even holes with two best net scores used for the odd-numbered holes.