Several sponsors are already on board, including Chesapeake Utilities and Schell Brothers, but additional partnership opportunities remain.

Golfweek announced its 2020 list of state-by-state Best Courses You Can Play on July 31, and the Cape Region is well represented.

Golftini optimistic about remainder of golf season and beyond

Golf equipment and apparel sales bounced back nicely as the pandemic issues continued to subside, according to the National Golf Foundation and other golf business sources.

Golftini is an women’s apparel company that is now enjoying the ride.

Owner Susan Hess has been a regular at the PGA Merchandise Show in Orlando FL every January since 2005. When I stopped by during this year’s Show, she had significantly expanded her booth space.

“It’s been crazy busy,” she said. “With the bigger space we have lots more to display and we don’t crash into each other while we’re moving around.”

Golftini clothes are sold at over 500 pro shops worldwide, including Rehoboth Beach Country Club. They can also be found at specialty retail stores, in addition to direct to consumer sales on the company’s website. Its skorts, pants, tops, and outerwear are sold in Great Britain and Europe and recently expanded to Australia. 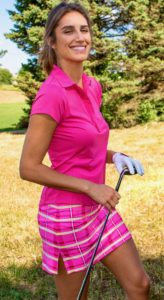 Golftini specializes in solid tops with patterned or printed bottoms, as in this Off the Grid look.

The company specializes in printed and patterned skorts. The patterns are designed and picked by Hess, the CEO/designer. Golftini is a bit different from many women’s brands as its tops are all solid, dyed to match and coordinate with its printed bottoms.

The company started offering stretch cotton products 15 years ago but adjusted its product mix as trends changed. “We now offer our skorts in 3 different fabrications and 6 different styles,” Hess said. “We really listen to our customers as to what they want, and we can adapt very quickly.”

“The pandemic has been a very scary time, especially at the beginning in March when we just had no idea what was going to happen. As time went by, we really just went from our gut. What is best for our company, our customers and our sales reps? Those were the things we talked about most days. We decided to come out better on the other side of this whole thing,” Hess said recently.

Hess continued, “This wasn’t easy, and we are still not through this, but we feel good about what we are doing. Golf is on the rise and one of the only sports that you can do safely. We are riding the wave. Listening to customers and making changes every single day. We want to give our customers more products, because they are asking for them,” she said. “I hope this all straightens out and we get to see our customers in person in the near future. For now, it’s Zoom, virtual fashion shows and change!”

Golftini has also partnered with Royal Albartross to add a few men’s items to its website store, including belts and shoes aimed at the premium market.

Hess made a good guess in deciding to expand her PGA Show booth this year. Every time I walked by it there was a large crowd in front as she and her people were busy taking orders for the coming season.

I took that as a good omen, despite the pandemic. If the news on that front continues to improve, Golftini should do just fine.

Erin Reid won the first flight, with Jean Chlastawa in second, Anita Pettitt in third, and Sheree Davis in fourth.

Jeannine Doane won the second flight, with Tricia Ritthaler in second, Katie Heintz in third, and Marsha McLaurin in fourth.

Margaret Moore won the third flight, with Atom Irwin in second, Nancy Froome in third, and Vicki Martina in fourth.

Yona Zucker won the fourth flight, with Patricia Magee in second, Carol Loewen in third, and Linda Eicher in fourth.