Santa, please don’t give me this stuff

Another year has gone by, and what another weird twelve months it has been, eh?

Once again, I appreciate that you’ve been consistently great at not giving me what I don’t want for Christmas.

I still need your help, however, because some new golf gifts I would prefer to not find under my tree remain out there.

Recently I have been watching “The Mandalorian” Star Wars series on the Disney Channel. It brings back fond memories of the original movies and creates some new ones, such as the Mandalorian’s repeated catchphrase, “This is the Way.”

That is a fun little mantra to use out on the golf course – at least if you’re playing well. 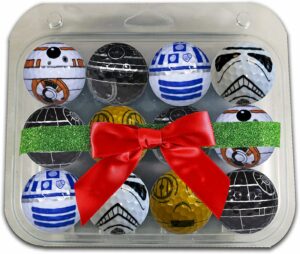 Nonetheless, I have no interest in the Star Wars Golf Ball set, available at Etsy.com for $29.70 per dozen.

Fun as it might be to “Use the Force” on some of these balls, such as the miniature Death Star, the idea of playing golf with them leaves me as cold as the dark matter of outer space.

Speaking of nostalgia, do you remember the old Pet Rock craze from 1975? An advertising guy came up with the idea of selling a rock in a box, complete with a bed of straw and an instruction manual, for $4.00 apiece ($22.00 of today’s inflated dollars, by the way).

He became a millionaire.

Someone recently decided to follow in those footsteps by coming up with a Pet Golf Ball, available at Etsy.com for $13.50. The ball is accompanied by a bit of artificial turf, a walking leash, and of course a box and instruction manual.

I give them props for putting a new spin on an old idea, as it were, but that’s the most I can say about it.

And speaking of inflation, I was a bit stunned to see how much this Vintage Golf Club Table is selling for at Etsy.

Made of dozens of old golf club and putter heads, this table sells for a startling $1,099.95.

The ad text says, “This can be a very thoughtful gift idea for someone who loves Golf!” and that it would be “perfect for your man cave, sports bar, [or] outdoor space.”

Pardon me, but I don’t think so. To me, it says someone had a spot welder handy and way too much time (and old golf clubs) on his hands.

It might have something to do with the pandemic and all the time folks spent indoors, but for some reason this year there are several alleged golf gifts trying to bring the smell of the outdoors into houses and cars. 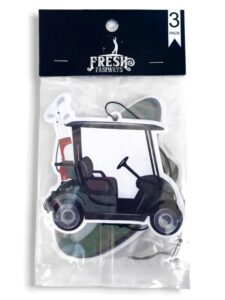 For instance, these Fresh Fairways hanging air fresheners come in a three-pack bundle depicting a golf cart, a golf green, and a golf ball. Sold at Etsy.com for $11.95, the ad copy says they will “help keep a nice fresh smell of their choice year-round.”

That’s a bit of a problem, considering that the only two scent options are called “Midnight Ice” or “Cold Water.”

Water that smells is usually something you avoid in the Cape Region – and with good reason.

Some folks in Massachusetts are selling a Fresh Cut Fairway Soy Candle on Etsy.com for $14.99. 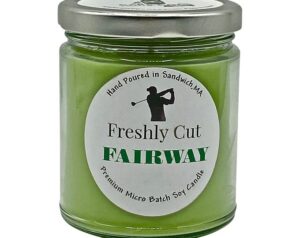 They suggest that with its “scent throws of fresh cut grass and a hint of citrus” the candle will bring back memories of “your time on Cape Cod walking the fairway of the 18th hole.”

On the 18th fairway during a hot muggy summer round in Cape Cod or here in the Cape Region, you are far more likely to encounter some decidedly less pleasant “scent throws” than fresh-cut grass.

As you know, I only use a golf cart when it’s hot, say 90 degrees or so. Nonetheless, I can sort of appreciate the ingenuity of the inventor of the Golf Cart Hotdog Holder, sold for $14.99.

Apparently, it is an Etsy best seller, even if the device’s design flaw is obvious at first glance. The Dog’on Caddy’s plastic U-shaped tray that holds the hot dog should work just fine if the cart is not moving. At the first big bump over a pothole on the cart path, however, there’s nothing to keep the hot dog in the tray instead of bouncing out.

In my opinion, however, no amount of tweaking could salvage the Custom Face Socks for Golfers.

Sold at Etsy.com for $17.00 per pair, the gift giver sends in a digital face image to the seller. The face photo then appears in multiple locations on the green socks, alternating with repeated images of crossed golf clubs and golf balls.

The ad copy claims that the recipients will “actually like” these socks.

I actually don’t think so. In fact, I’m actually sure of it.

Thanks again for the opportunity to tell you what I don’t want for Christmas. Have a great holiday, and please say hello to Mrs. Claus and the elves.