The Cape Henlopen High School golf team won its second and third matches of the 2022 season, while also experiencing a pleasant downward trend in the team scores. 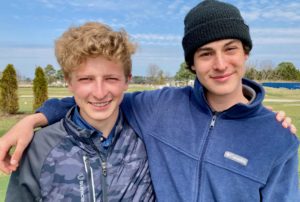 Junior Ethan Mercer won medalist honors in the Vikings’ 181-277 victory over Lake Forest March 25 with his 42 on the front nine at Rehoboth Beach Country Club.

The team’s 181 total was a six-stroke improvement on their March 22 opening day score against Smyrna at Garrison’s Lake. Mercer smiled as he readily agreed that he enjoys home cooking, which in this case was five strokes better than his Smyrna result.

Viking head coach Robert Harrod complimented the Burn, Mercer, and Gabbard for their consistency as the top three golfers for the team. “We’re still trying to figure out who will be the rest of our starters. They were a little rough around the edges, but we played through it.”

Burn won medalist honors for the second time this season with his 42. Mercer’s 43 took second place overall, followed by Reynold’s 46. Gabbard completed the team scoring with his 48.

Burn credited a steady approach to his round, while Reynolds said he managed to avoid any real trouble. Gabbard said he needed to work on his putting, which he did during the next day’s practice session.

Harrod said, “I think it was a great team win. I think our guys were a little surprised at how we got under 180, especially in the cold we had to deal with. There was a 32-degree wind chill and yet they continued to go lower. It was nice to see how the team celebrated the win. They are showing some great team dynamics and spirit. It looks like we now have four consistent solid scorers, so we’ll see who joins them for the fifth and sixth spots.”

Weather permitting, the Vikings were to host Caesar Rodney March 31 at RBCC. The Cape squad hopes for a rare victory against the Riders.

A great $5 program now here in the Cape Region

Imagine you are a young person eager to develop your skills as a golfer, but you don’t have the advantage of playing privileges at a country club or public golf course through your family connections.

The Youth on Course program is a great alternative, and there is a Cape Region option for those who would like to participate.

As noted in past columns, California-based Youth on Course is a 501(c)(3) organization that enrolls member golf clubs who make tee times available for junior golfers, who pay $5 per round at those clubs. The money raised by YOC reimburses the clubs for the green fee difference they would normally charge for that playing spot.

Mulligan’s Pointe near Georgetown is the closest golf club participating in YOC, with tee times available for YOC kids after noon on all days except Wednesday.

It is a great opportunity to grow the game, and it’s great that Mulligan’s decided to sign up.

YOC also offers internship and caddie opportunities as well as college scholarship programs, for which $2 million have been awarded thus far.

For more information, or to donate to help with the subsidy program, go to YouthOnCourse.org.

Just because you can does not mean you should 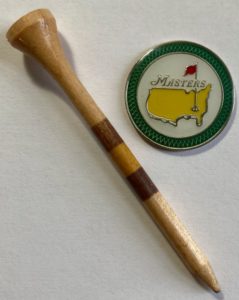 Both of these can be used as ball markers, but tees presents risks that flat markers do not

If your golf ball is on the green and someone else’s ball is further from the hole, it is common to mark your ball, remove it, and replace the ball once it becomes your turn.

There is a huge business in selling these ball markers, which are typically flat, circular, and about the size of a quarter. Under the Rules of Golf, however, you can also use a standard golf tee for this purpose.

That does not mean you should.

In a recent golf match between Cape Henlopen and Sussex Tech, the ball for a player from one team was a good fifteen feet or more from the hole. His playing partner used a wooden tee to mark his ball, which was several feet closer.

The player from farther out aimed carefully and made a nice-looking putt. A golf coach from the other team and I watched, dumbfounded, as the player’s ball hit that wooden tee dead on, bringing it to a complete stop about 7 feet from the hole.

It was obvious that his putt would have finished far closer, if not in, if the ball had not hit the tee/marker.

Fortunately, after the tee was removed, the young man made his second putt to finish the hole.

Golf sometimes gives you the opportunity to learn a painful lesson.