Bill Hansen is a Vice President of Eiger Marketing Group and the leader of the busy folks who run the ShopRite LPGA Classic presented by Acer. We met Sept. 30 to discuss the changes to the tournament because of the COVID-19 epidemic.

Not much was normal this year, starting with the fact that the ShopRite is usually held in late May/early June.

“We knew early on that it wasn’t going to be the regular date. The next opportunity for us came when they announced that the Olympics were cancelled for this year. That opened up the July dates that we originally announced would be the new time frame,” Hansen said.

The schedule moved once more, however.

The LPGA usually goes on an Asian swing in October with limited field events in places like Thailand and South Korea. The pandemic wiped out those events, providing an opportunity to time-switch U.S.-sited tournaments such as the ShopRite.

“In late May or early June, we switched to the October dates. We had to check with Seaview Resort and make sure they didn’t have anything scheduled, or at least nothing that couldn’t be easily moved. Once we knew there were no issues with Seaview, we let the LPGA know that it would work,” Hansen said.

The State of New Jersey’s pandemic decrees also eliminated the ShopRite’s famous Pro-Am. It is one of the largest in professional golf, with two days of rounds on three courses, with morning and afternoon sessions each day. Hansen said, “That’s usually 1,200 rounds on [Seaview’s] Bay and Pine courses as well as Galloway National.”

“We also would have 1,000 people at the Pro-Am party, but there was no New Jersey way to pull that off,” Hansen said.

The two-day pro-am also made the ShopRite one of the LPGA’s rare three-round tournaments. “Once the pro-am was over, the LPGA came to us and said there’s no reason to limit it to three, let’s go to four,” he said. So they did.

The time of year also reduced the size of the field. “We had to drop down from 144 players to 120, because of daylight. This is the first time we ever had to rent lights for the driving range,” Hansen said. With sunrise just before 7:00 a.m. and with the first tee times in the first two rounds at 7:30 a.m., there really were only so many hours in the day.

My first glimpse of how different things were going to be came when I drove in Wednesday morning. I didn’t see the tall fabric wall with repeating ShopRite and Acer logos separating the Bay Course from the adjacent New York Road. 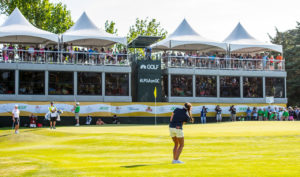 “Nope. No suites, no stands, no pavilions, no fabric walls, none of that was needed,” Hansen said. “We also usually have approximately 850-1,000 volunteers to help. We’re down to 125 this year. There will be walking scorers using phones, and the players can also use an LPGA app for live scoring. No scoreboards on the course,” he said.

Despite these changes, the sponsor commitment did not falter, and Hansen was deeply appreciative. “All of our sponsors were great. They were fully supportive and kept their commitments,” he said.

According to Hansen, the 2020 event is donating approximately $1.5 million to local charities, the same amount it would have in a normal tournament. That brings the total fundraising level to over $35 million during the time that Wakefern Food Corp., ShopRite’s owners, have been involved.

The pandemic created huge disruptions for life in general and in professional sports. Even with the necessary adjustments, however, Eiger and the ShopRite folks found a way to produce the 2020 edition while still meeting the tournament’s charitable goals.

Nine and Dine set for October 20

This year’s format includes several changes. The pro shop will assign tee times and assemble foursomes, who will play 18 holes instead of 9. Individual contests and skill holes will be awarded.

The $150 per player entry fee covers the golf and cart, a boxed lunch, snacks, soft drinks, and adult beverages. Thanks to the pandemic there will be no post-tournament party, but hope remains for a return to the regular Nine & Dine format in 2021.

To sign up or for more information, call the Beebe Medical Foundation at 302-644-2900 or visit beebemedicalfoundation.org.