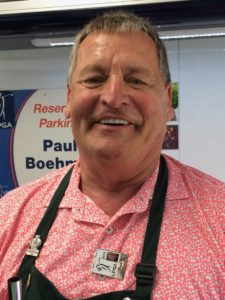 When I met Paul Boehmer in his trailer workshop at the ShopRite LPGA Classic at Seaview Resort on June 5, the official club technician for the LPGA was scraping dried glue from the business end of a chopstick.

Boehmer discovered “20 years ago” that chopsticks from the P. F. Chang restaurant chain are “perfect” for spreading the freshly mixed epoxy he uses to attach club shafts to club heads.

He kept up a steady patter of funny stories and wry commentary about his work while never slowing his pace, whether re-attaching clubs to shafts or re-gripping an entire set.

Boehmer has been a constant presence for the Ladies Professional Golf Association since 1999. The 63-year old resident of Dallas, TX travels each year to roughly 25 tournaments in the U.S. and Canada.

Before coming to the tour, Boehmer ran his own club fitting and repair shop in San Antonio, TX. When first asked to take over the LPGA assignment, “It was supposed to be for two weeks while the regular guy recovered from some injuries. They told me it would be like a vacation from my shop. Those two weeks haven’t stopped yet,” Boehmer said.

“March when I go to Phoenix is when I see most of the players. It’s one of my busiest weeks because I haven’t seen the golfers for a while, and they’ll have new clubs and other changes to deal with,” he said. “When the players have new equipment, I sit down with them and see what and how they’re hitting, and ask about any differences. We have a nice arrangement with Trackman [launch monitors] for the trailer, and that helps.”

Boehmer keeps a collection of the LPGA players’ specifications on file. He also maintains a stockpile of the most common pieces of club equipment seen on the LPGA tour.

He has the usual club fitters’ agnosticism about what players use. “I have to be pretty much ‘Golf Switzerland’ just like any other fitter. You can’t focus on any one brand, because that won’t work for everybody,” Boehmer said.

Judging from the workshop’s drawer labels, however, LPGA players are huge fans of Golf Pride grips in several styles and colors – but those grips don’t last long. Boehmer said most players replace them every three to four weeks.

Trailer size limitations keep him from having every equipment option at his fingertips. “I keep track of the more popular and current models, and talk to the manufacturers as they come out with new stuff. I keep a good stock on hand, and work offseason to stay abreast,” he said.

Boehmer’s arrangement with the LPGA is very different from the PGA Tour, where equipment trailers from several golf companies often caravan to the men’s Tour stops every week. His trailer is usually the only one available for the LPGA golfers, supplemented by tour reps for companies that have a good following with the women.

Several sponsors support the LPGA van, with their names and logos displayed on its side. Boehmer said club reps can and do store their materials in the vehicle, which makes their job easier. “It’s a bit of a community club workshop,” he said.

I asked him why LPGA club fitting arrangements were so different from the men’s tours. Boehmer was bluntly realistic: “Golf is still a business, and it’s expensive. The LPGA doesn’t yet get the kind of network coverage compared to the PGA Tour,” so the club companies don’t have the same economic incentive.

Nonetheless, Boehmer enjoys the communal aspect of the LPGA trailer. “It’s not so private as it is with the others. It’s all very homey and personal,” he said.

We also discussed the wide range of golf swings found on the LPGA Tour.

Boehmer said, “There’s always been a big difference among the ladies. You’ve always had your big swingers and your smooth swingers. That’s where club fitting is so important. Lexi Thompson might have a 60-gram X-Flex shaft in her driver, and that works for her. For others, you work to adjust the flex type and shaft profile for the others to give them a better opportunity to compete. That’s what makes this job so interesting,” he said.

“You also have to take into consideration how the courses are set up. There are some places where they can bomb it out there, but there are other tournaments where long hitters can’t use their drivers most of the time. Every one of these players is capable of outperforming the competition nowadays. You don’t get your card unless you’ve got some game,” Boehmer said.

(Part 2 of this profile will continue in an upcoming column.) 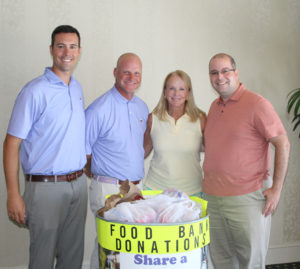 Congratulations to the Gold Team of the Rehoboth Beach Country Club 18-Hole Ladies Golf Association for their 13-8 victory in the 15thannual Black and Gold charity tournament.

This year’s event raised $1,415 as well as 280 pounds of foodstuffs for the Food Bank of Delaware. The group presented the proceeds to Food Bank Community Relations Manager Chad Robinson at the tournament luncheon.