I enjoy watching professional golfers practice and prepare for their rounds. The drills help their game and could also help yours.

Here are examples from the 2022 ShopRite LPGA Classic presented by Acer. 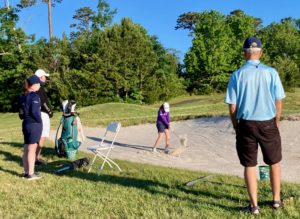 Jaye Marie Green quietly putted 3-footers on the practice green at Seaview Resort. However, as her caddie Jack Clarke explained, these were no-look putts.  “She is hearing it go in, instead.”

I watched Yu Sang Hou practice wedge control at the range’s chipping green from 30, 35, and 45 yards. Her caddie, Simon Middleton, set up ten balls at each spot, with the former University of Arizona golfer using 5 or 6 each time.

Middleton called it the Dial drill, where Hou tries to make each shot land within 6 feet of the hole. “She starts her warmup with it. It’s the best way to prepare,” he said.

Hou used her 58-degree wedge for the series. She uses her 54-degree club for sand shots.

There is a nicely shaped practice bunker at Seaview. I watched recent tour winner Leona Maguire hit several good sand shots under the watchful eye of her caddie as well as her twin sister Lisa, currently on break from dental school.

On the range, Caroline Inglis seemed to dare herself to hit an alignment stick with her driver. It was only two inches past her tee. 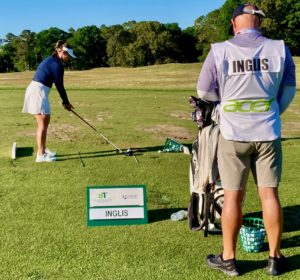 Caroline Inglis at the Seaview range

This unusual setup created an incentive to make sure she came at the ball from the inside. The noise alone from hitting the alignment stick would have been, shall we say, impressive.

I know this from personal experience.

Charlotte Thomas was doing a speed drill on the practice green. Longtime LPGA caddie Bob Kendall, serving on her bag this season, described her routine.

“Well, obviously speed is important when you’re putting. She’ll start out with 15 paces say 45 feet, and then go to 12 paces and then nine and then six and three.” Kendall said.

“She’ll work on her speed and go both directions, either down grain or into the grain, [and] try to judge her speed. It’s all feel.”

Kendall continued, “She’ll do the same thing before every round but it’s not quite as extensive. She gets a feel for the speed for the day.”

“Really, it’s just to get a feel, with repetitive motion, so on the course if you have a 30-footer you know exactly how hard to hit it. You don’t want to leave yourself 3- or 4-footers all day. It’s good to have tap-ins. That’s certainly a drill that helps the player get close to the hole. You may not make a lot, but you have an easy [second] putt,” he said.

Kendall also discussed the effect of the greens’ turf, which can be a significant hurdle at Seaview. “You can tell it’s a mix of poa and other grasses. A lot of times it’s tough when you have shadows and a lot of changing colors. That’s another reason to do those drills so you work on that feel. You rely less on eyesight and visual stuff,” he said.

“We’re second out tomorrow at 7:26 and the greens should be ideal. If you’re teeing off at 1:30, and the wind comes up in the afternoon, that makes a difference even on putting. You make sure you have a solid base, trust what you’ve worked on, keep it simple, and stay positive,” Kendall said.

In Division One, Maxine Ansbach won the front nine with Janice Hassch in second. Peggy Claussen won the back nine and Sue Ahern took second. Karen Feuchtenberger won the overall 18 with Brenda Lewes in second.