There’s a mental game I sometimes play while sitting in the bar and dining area of my country club, or in other places where I’m likely to overhear snippets of conversation.

I listen for a while, and then plot out a storyline based on a sentence or two of particularly memorable dialogue.

It appears that I’m not the only one to try this experiment. 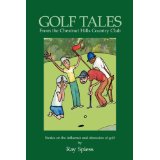 Ray Spiess seems to have looked back on a few decades of close observation of country club life in putting together Golf Tales From the Chestnut Hills Country Club, ($13.95).

This intriguing collection of six short stories reads like it is also based on similar bits of momentary inspiration.

Spiess admits to creating some of his characters from a variety of real-world composites. I’m willing to bet, however, that at least a few of these allegedly merged personalities are actually limited to a single person. I say that because several of the golfers, golf widows, and others are nicely sketched out here in more than two dimensions.

“Freddie and Mike, A Parable” focuses on a part of golf that is now in short supply in the country clubs that are typical of the kind on which this anthology is based. It’s a decidedly unromantic remembrance of what caddying was really like for the young boys who once flooded these clubs during the summers for a chance to pick up some spending money.

“Glass and Crystal” brings the action to the present day, featuring the club’s golf pro. The former PGA Tour player’s career path turned to the club’s pro shop, after a slow decline in playing skills. A truly gifted yet somewhat diffident junior golfer sent to him for instruction leads the pro to revise his thinking about his own future.

The narrator in “Cheating (Not Always) Shows and Never (Sometimes) Goes” displays an all-too-normal lack of self-awareness as he describes the many ways that another member of his regular foursome increases his chances on the golf course. Of course, there’s almost always an excuse for cutting corners, and not just while playing games.

“Ace Aikens” reacts to a hole-in-one that someone with his high handicap should never expect as if it was a sign from on high to rededicate his remaining years to improving his golf game. The fact that the rest of his life, especially on the domestic front, isn’t moving on quite the same path doesn’t seem to affect his focus—or does it?

“Ladies Day” was perhaps the hardest story for me to appreciate. The fact that I don’t play bridge and am not a middle-aged woman probably has a lot to do with that. Even so, the characters in the story seemed awfully realistic to me, based again on my own experience of listening carefully during similar opportunities.

“Shifting Sand” had an elegiac quality, centered on two former childhood friends who reconnect after meeting again for their thirty-fifth high school reunion. As with many seniors, the regrets they express are often based on roads not taken, as opposed to the paths they chose.

During each of these stories, Spiess interjects a fitting reference or two to one or more characters from the other pieces. It’s a really neat way of showing how these stories generate from the same Midwest country club. Woven together, the stories form a kind of tapestry about a particular time and place and the folks who inhabit it.

That storytelling device is probably the main reason why I think Spiess also likes to make up stories based on the overheard chatter at his own club.

This collection is a pleasant, thoughtful bit of writing. There’s a welcome maturity to these tales that should also make it a nice gift for some of the older golfers you know.

They’ll find themselves nodding in recognition as they read it.