This year’s golf book gift guide suggests several commendable choices that cover a wide range of interests in the sport, including biography, fiction, instruction, and course architecture. They were selected among the dozen or so book reviews run in this column during the past year. 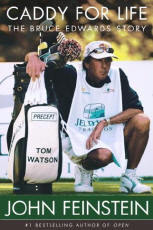 Edwards, who was Tom Watson’s almost equally famous caddie, died from complications of ALS in April, but not before he gave Feinstein a chance to pen a permanent legacy about his life and times.

For Edwards, there never was anything better to do than caddying, and he excelled at it.

He was lucky to find himself paired up with Watson very early in his looping career. The two men’s personalities meshed well, and as both admitted to Feinstein, they became closer than brothers.

Writing such a biography as Edwards slowly lost his battle with ALS must have been a wrenching experience for Feinstein. As with his other writings, however, he came through with a winner.

The next best book of the year is a work of not-so-far-fetched fiction, Troon McAllister’s Barranca (Rugged Land; $23.95). 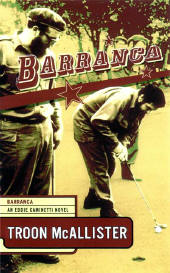 A national crisis occurs when a South American revolutionary corners the market on an agricultural commodity on which the U.S. economy critically depends—namely, coffee.

The President recruits golf hustler Eddie Caminetti, who’s previously beaten him and other high government officials, to travel south to meet the man causing all the trouble. That’s because the leader of the uprising happens to be a golf addict.

The White House hopes to restore the nation’s economic health with a golf match between the hustler and the revolutionary.

The next best books are part of a four-part collection, Golf Magazine’s new Better By Saturday Series (Warner Books; $15 SRP each).

Each book is devoted to one of the four main aspects of the game—driving, iron play/long game, short game, and putting. The short, easily-understood suggestions from the magazine’s Top 100 Teachers are accompanied by photographs to illustrate the points.

On occasion, short paragraph-long sidebars, called Quick Tips, supplement or explain an aspect of the tip under consideration.

Golfers with ready access to a good teaching professional might not need these books as much as others. For everyone else, however, especially those who have played golf for a while and developed a few bad habits, these books will be very handy. 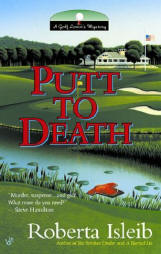 Putt to Death (Berkley Prime, $5.99 SRP) is every bit as good as Isleib’s first two Burdette novels, Six Strokes Under and A Buried Lie. It also continues to explore a basic question I believe Isleib is working out through these novels–how does a professional athlete’s upbringing affect her performance in her sport?

In addition, of course, there’s an additional personality trait Burdette has to contend with—her knack for finding dead bodies, under conditions that make her a prime suspect.

What’s a young woman to do?

The final selection for this column is a good example of the fact that you can’t assume a book is “only” a coffee table book.

Evangelist of Golf: The Story of Charles Blair MacDonald

In The Evangelist of Golf: The Story of Charles Blair MacDonald (Clock Tower Press, $85 SRP), George Bahto assembled an enormously detailed collection of materials from private club libraries and other non-traditional sources to create a well-done history of the beginnings of golf architecture in America.

The thick volume’s proportions, however, include far more than the usual gorgeous photographs that fill the pages of similarly-sized tomes.

Bahto provides a wealth of information about Macdonald, his courses, and his influence on American golf in matters going well beyond the creation of these vast playgrounds.

If the golfer you’re buying for has ever talked about course design, this is a great gift idea.