The ecology of golf tees 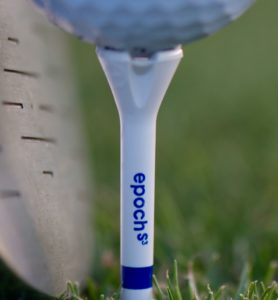 Evolve Golf’s Epoch tees are made from recycled plastic

Evolve Golf CEO Ben Maloy is concerned not only about the sport’s impact on the environment, but also about an alleged solution that others suggest would ameliorate those effects.

When we met at the 2020 PGA Merchandise Show last January, Maloy started the conversation by referring to a recent announcement by the Royal North Devon Golf Club in England to outlaw any use of plastic tees, in favor of the wood-only variety.

My first reaction was “How could they enforce that?”

Then he discussed the comparable environmental impact of wood versus recycled plastic. For example, roughly 20,000 tees can be obtained from a single birch tree, while also creating a huge amount of sawdust. In China that sawdust is used for heating factories, producing some of that country’s infamous industrial smog.

Durability is another consideration. Maloy said his company’s plastic Epoch tees can last three or more rounds, while a typical golfer will break 6 wooden tees per round. This produces far less litter on the course. The broken tees add to the cost and therefore the environmental impact of the wooden tees.

Maloy recognizes that the tee market remains split, however, so he continues to cater to both sides. The company sells its Good Wood tees, and in a partnership with the Arbor Day Foundation plants at least one tree for each one used in tee production. He said they committed to planting 10,000 trees in 2019 and expects that commitment to continue.

In addition, Evolve is a leader in customization of not only tees but also other golf accessories. It offers print services for the cup and the shaft, using artwork or simple text. Color bands on both the Evolve and Epoch tee shafts also help golfers maintain consistent tee heights.

The company makes hand-forged metal ball markers, pitch repair tools, bag tags, and bottle openers, all of which can be customized for clubs, tournaments, or other outings. Maloy also said Evolve currently enjoys a “27% and rising” market share among private U.S. golf clubs using the Epoch composite tees as part of their complimentary service to their members. 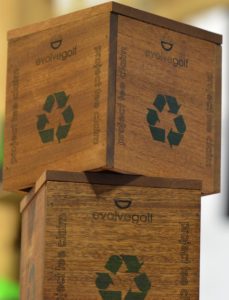 Evolve Golf’s Project Tee Boxes give golfers a place to put their broken tees for recycling, instead of littering golf courses

Maloy discussed another environmental initiative – his company’s Project Tee Boxes. With an oversized tee forming the opening of the container, golfers are encouraged to deposit broken tees at the pro shop or elsewhere on the course, for eventual recycling.

Evolve has also entered the sports sock market. Maloy said this initiative came from his decision to do some serious running. After suffering with standard running socks, his more experienced running buddies told him to try wool instead. As it turned out, however, all-wool socks have their own drawbacks.

That led to the creation of Evolve’s Motionwool, a blend of polyester with 47% merino wool. Made in North Carolina, the socks provide compression at the midfoot, ankle, and top, with crosshatched venting on the top.

Maloy discussed the next potential growth area for tees, in biodegradables. He and I both remembered some failed efforts with cornstarch several years ago. More recent compounds under development show more promise, he said, including one that could degrade in about six months. “Biodegradable is where I think it will go” Maloy said.

The wood-tee-only movement could be understood cynically as virtue signaling or more charitably as a well-intentioned but not fully understood gesture toward an improved environment. Given the potential improvements in plastic tees, especially in biodegradable form, it is possible that the truly environmentally sound approach will instead eliminate the continued production of the wooden ones.

I will be at the Seaview Hotel & Golf Club in Gallaway Township, NJ for the ShopRite LPGA Classic presented by Acer Oct. 1-4.

It is a very different tournament this year. No huge pro-am, no fans, and with Covid 19-related health and safety restrictions for the players, caddies, and the media members covering the event.

I plan to let you know what it was like in upcoming columns.

The Mulligan’s Pointe Ladies 18-Hole group played their last game of the season Sept. 29, with scoring based on Most Net Pars or Better.

The Kings Creek Ladies 18-Hole group played a tee to green game Sept. 24, in which no strokes while on the green counted toward the total.