The opposite of a bounce back

The professional golf tours have fully adopted the use of statistical measurements as an integral part of providing entertainment value for their fans.

In addition, given the open promotion of legalized gambling on the sport, the use of scoring data for that purpose cannot be overlooked.

For example, the PGA TOUR keeps track of Bounce Back percentages. This rating shows how often a player recovers from a bogey with a birdie on the very next hole. Rory McIlroy, Jordan Spieth, and Jhonattan Vegas recently lead this category with 66.7% success rates.

The opposite of a bounce back is not tracked nearly as often, but it has its own name among pros and amateurs – the PBFU.

A Post-Birdie Foul-Up occurs when a golfer makes a birdie and butchers the next hole, immediately wiping out the benefit of a good score. 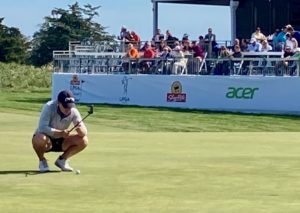 Dana Finkelstein lines up a putt at the ShopRite

I witnessed what I believe to be a rare triple PBFU during the second round of the 2021 ShopRite LPGA Classic presented by Acer.

At the start of the day, Jennifer Chang stood at even par. Dana Finkelstein was 2 under, and Lindsay Weaver was four over par. By the time they reached the 315-yard par 4 twelfth hole, Finkelstein was one over for the day. Weaver had taken two strokes off her total, but Chang had struggled and fallen to six over.

The group’s collective mood improved immediately after their tee shots on twelve.

Finkelstein fired her approach from 110 yards to 15 feet below the hole. Weaver’s second shot from 85 yards in the center of the fairway stopped six feet past the hole. Chang’s drive put her only 50 yards from the center of the green, and she hit a fine pitch to about 7 feet away.

Each golfer made their birdie putts and smiled.

Those smiles disappeared on the uphill thirteenth hole.

Chang’s tee shot landed in the right rough about 155 yards out. Her approach fell short and onto the green fringe, about 25 feet below the hole.

Weaver’s approach from 150 yards from the center of the fairway stopped near a sprinkler head, about 30 feet below the hole.

Finkelstein drove into the right rough 176 yards out and from there could only advance the ball to the fairway about 30 yards from the center of the green. She pitched to five feet short of the hole. Her par-saving putt stopped inches from the hole, leading to a PBFU.

Weaver took relief from the sprinkler head and putted. Unfortunately, the ball hopped on her, leaving her 4 feet short of the hole. She missed the next putt, creating another PBFU.

Chang had the best chance to make par but her first putt stopped four feet below the hole. Her next putt went even longer past the hole. The bogey putt dropped in, however, for the third PBFU of the group on that one hole.

As they say, stuff happens.

Over the next five holes, Weaver shot even par, with one birdie and one bogey. She missed the eventual one-under cut line by three strokes.

Chang made two more bogeys and a birdie, ending her 2021 ShopRite experience at 7 over par. 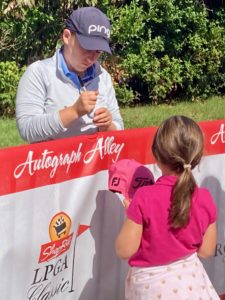 Dana Finkelstein signs a ball for a young fan

Finkelstein parred in, making the cut on the number.

In a post-round interview, Finkelstein disclosed that she had a dizzy spell during the seventh hole of the first round. “I looked down and the ball is moving around,” she said.

As for her second round, Finkelstein said, “Today was not exactly what I would have liked. But coming off of yesterday, I was kind of unsure coming into today how it was going to go, because I was hitting it all over the place.”

“I think I was just a little dehydrated. I feel better today, I just didn’t have any momentum to build off of. I just hydrated and slept. Woke up and felt totally fine. I made a lot [of putts] yesterday and today nothing, sometimes that happens.”

Finkelstein remained both realistic and optimistic: “You have to get a little lucky on poa sometimes. There’s still tomorrow.”

I would like to think that attitude helped in her final round the next day. Finkelstein played the front nine at five under par and the back nine in one under, for a 65. Her 7-under total for the event tied for 19th and she earned $18,615.

That was another bounce-back in the right direction.

The First Tee of Delaware began its 2021 Annual Appeal and “FRIENDraising” Campaign Nov. 1. This year the youth-serving golf organization seeks to encourage recurring and step-up giving over several years, while also seeking volunteers, coaches, and mentors for upcoming programs and events.

In addition, investment company Charles Schwab designated the Delaware First Tee chapter as a recipient of a Challenge Grant initiative from now through 2026. For every $2 the First Tee raises, Charles Schwab will match with an additional dollar, up to a maximum payout of $25,000 in year one.