When you are low on the priority list on the LPGA Tour, you sometimes have to take advantage of someone else’s misfortune.

In the 2020 ShopRite LPGA Classic presented by Acer, Louise Ridderstrom replaced Jaclyn Lee at the last minute. Lee’s caddie tested positive for Covid-19 on the Monday before the start, and under the tour’s pandemic proximity rules that took took Lee out of the lineup. Ridderstrom, a young Swede and a past Symetra Tour winner, stepped into the late-opening spot.

She joined Australians Sarah Kemp and Su Oh on the tee Thursday morning as the first group off the first tee. 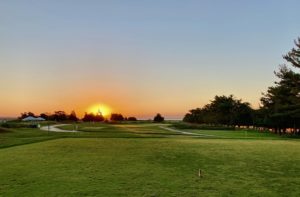 A pretty sunrise shortly before the Oct. 1 start of the 2020 ShopRite Classic at the Bay Course, Seaview Resort

Wet conditions from earlier in the week led to the announcement before the round that the players could take lift, clean, and place relief in the fairways. The wind varied from 6-10 mph from the west, presenting crosswind challenges on many holes.

I followed this group for the full 18 holes. Kemp finished one-under par, with Ridderstrom at even par and Oh at one-over.

Despite their similar results, the ways these golfers played the Bay Course at Seaview Resort could not have been more different.

On the other hand, Oh’s attacking style sometimes ran into trouble, especially with the thick, matted, gnarly fescue that swallowed up wayward drives or approaches, or in the wet rough on low-lying holes.

Her drive into swampy rough right of the 8th fairway led to a chip-out and eventual bogey.

Oh later drove into a mound of fescue on the right side of the 10th fairway. The group only found the ball when Kemp unwittingly stepped on it. An LPGA rules official told the players to recreate the lie as best they could.

Oh’s next shot went hard left into the rough on the other side, leading to another bogey.

Her drive into nasty fescue on the 16th couldn’t be found within the required three minutes (or thereafter, to be frank), forcing Oh to return to the tee box for her third shot and an eventual double bogey. A three-putt bogey on the short par-3 17th didn’t lighten her mood, either.

Kemp played a very steady round by comparison, almost a stately procession. She hit twelve out of fourteen fairways and was on the green in regulation 14 times. Kemp birdied the 4th hole with an approach 6 feet right of the hole. Her shot to the 10th hole was even closer – about 3 feet away by my estimate.

Kemp’s only miscue of any consequence came on the 9th, when she drove into the left fairway bunker. Her next shot landed in deep rough near the bunkers that crossed the fairway, forcing a short recovery instead of a third shot to the par 5’s green. Her fourth from 73 yards out finished 15 feet from the hole, but Kemp could not convert the par attempt.

After the round, Kemp described her day as “solid. I rolled it well, and conditions were a little soft.”

Ridderstrom was often not as long off the tee as the other two women on most occasions, creating added pressure to bring her approach shots in as close as possible. As she said after the round, however, “We had some struggles with the wind, not picking the right clubs for it at first. That got better as we went along.”

Her hybrid approach to the long par-4 second hole finished about 5 yards off the green, and her chip shot stopped quickly 12 feet from the hole. That led to her first bogey of the day. Her 45-yard pitch to the par-5 third green sucked back several feet, giving her an unlikely 35-foot birdie putt that didn’t happen. Ridderstrom had similar long first putts on other holes.

Her bogey on the 10th came from coming up short on her approach after a nice tee shot, landing in a steep greenside bunker. Ridderstrom’s blast from there failed to reach the green, requiring two more shots to finish the hole.

Her game came back a bit on the long par-3 11th, with a pleasant 20-footer for birdie that produced a broad grin. A chip shot that ran a little far led to another bogey on 13, but Ridderstrom bounced back with two birdies on the 16th and 17th holes, finishing her round at par.

Unfortunately, none of them made the cut for the weekend. Kemp finished one stroke beyond the cut line, while Oh and Ridderstrom ended their 2020 ShopRite an additional stroke behind Kemp.

As a group on that first day, however, they were a good example of how different styles of play can lead to very similar results.