The Cape Henlopen High School Viking golf team earned a seventh place finish in the 2015 State Championship Tournament, held at the South Course of Wilmington Country Club May 26 and 27.

Over 60 Delaware high schools have a varsity golf program, by the way, just to keep the Vikings’ efforts in perspective.

“I thought the kids played solid rounds, on a beautiful but very tough golf course,” said Head Coach Claudio Smarrelli. “We weren’t able to get up here to play a practice round, and they struggled with the hills. All of our courses during the season are flat, and they had trouble figuring out which club to use for the uphill shots. It was the same way for other downstate teams. I saw a bunch of downstate players hit their approach shots short.”

Cape was the only Sussex County team to finish the tournament. Three golfers from three other Sussex County high schools-Seaford, Woodbridge, and Sussex Tech-made the cut among the individual players.

Kevin Charles, the Delaware Interscholastic Athletic Association executive director, explained that this year the DIAA adopted a new scoring format. Their intentions were to cut down on six-hour rounds, and to give the best golfers a chance on an individual basis, regardless of their team performances.

For team play, the best four scores counted for each school in the first round. The team’s three best scores in the second round were combined with those four for the tournament total. The cut for the second round was the top 60 and ties, which this year meant that any golfer scoring 94 or less played the next day.

Several schools, such as Salesianum, Tower Hill, and Appoquinimick, put all six of their golfers into the second round. Cape had three golfers continue, the minimum required to remain in the team tournament.

Matt Zehner, who will return to the Vikings next year, said he eventually figured out how to play the hills.”I liked the downhill shots,” he said with a grin. “On the uphill shots I went up a club, and went down a club for downhill shots.” He shot 92-88-180. 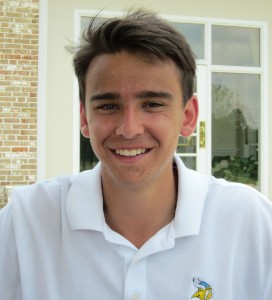 Senior Mason Jones noted his inconsistency with his approach shots over the two days, posting and 89 and 88 in his last state tournament. He said his chipping and putting went well.

Senior Mike DeStasio posted an 85 in the first 18, followed by a second round 91. Senior Darren Branner shot a 98 the first day, good for fourth among the Vikings, but four strokes away from the cut line.

The Vikings were caught in Memorial Day traffic the night before the tournament, taking more than three hours to reach their Concord Pike hotel. Smarrelli expressed appreciation to the Cape golf boosters, who assisted with the hotel and meal expenses for the team. He also thanked the several Cape golf courses that opened their facilities to the team, including The Rookery, Rehoboth Beach CC, Kings Creek CC, Midway Par 3, and American Classic.

In addition, Smarrelli noted the help he and the team received from assistant coaches Sam Purple and Sean Toner.

The 2016 State Championship Tournament is scheduled for Rehoboth Beach CC.

The Kings Creek CC Ladies 9 Hole group played a “Step Aside Scramble” on a hot, muggy June 1st morning. Head pro Kevin Wiest joined in as a twelfth player to fill an open spot, to create four teams of threesomes.

In this otherwise normal scramble format, whoever’s ball is picked for a given shot does not take a turn at hitting the next one–hence, the step aside.

Shirley Maloney, Suzie Shevock, and Wiest took first place, so the word “ringer” might also apply to this particular competition. Shevock also won closest to the pin on the 13th hole, hitting her tee shot to 11 feet 11 inches.