Trees grow up and out, turf grass seeds and rhizomes shift to spots no one intended, and bunkers change shape due to wind, rain, and the golfers who go in them.

Golf course superintendents can’t always work to restore their properties to the original or an improved landscape design during the busy season. Cape Region greenskeepers and their staffs use the late fall and winter to concentrate on projects that go beyond mere maintenance.

For example, last November I played Baywood Greens on a beautiful, sunny but not too crowded day. On several tee boxes, the maintenance crews had punched big holes in the turf, and there were other obvious signs of serious mucking about.

Jamie Palokas is the course superintendent, and graciously filled me in on the work Baywood is doing this winter.

What I saw was part of a multi-year renovation of several forward tees, enlarging and leveling these increasingly popular teeing areas. Palokas and his crew have already completed work on the tees for the 6th, 11th, and 12th holes, and this winter finished up with the tees on the second and 14th holes. He hopes to continue with two to four such tee box restorations and improvements each winter.

Paolokas noted that more and more golfers are using these forward tees, including “seniors, women, and kids,” as well as those new to the game. As he explained it, “With our golf program off to a great start, these tees have become crucial to accommodating kids playing the game and enjoying it.”

A shorter course is a great way to encourage success and grow the sport. It’s a natural and achievable goal for Baywood and other golf course operators.

Palokas said his staff are also “attacking aggressively” the trend for the course’s bentgrass turf to move into the areas intended for only tall fescue rough. Grass will go wherever it can, so this is a never-ending chore for superintendents trying to keep to the original intent of the course designer.

As Palokas noted, “Bentgrass in tall fescue rough poses problems aesthetically and with playability.” Visually, the combination of the two grasses doesn’t fit the look of the course as planned. Bentgrass at rough height also “creates difficulty in judging how much force is needed to strike the ball,” Palokas said. A golf ball can easily become buried in these areas, making a challenging course even more difficult and slowing up play.

Fixing the problem requires “aggressive seeding and sodding practices,” according to Palokas. During the past year, he and his crew have worked on the 2d, 11th, 12th 14th, 16th, and 18th holes. He hopes to have the rough on the golf course “bentgrass free” in five to six years.

So far at least, this winter’s milder weather cooperated with Palokas and his staff, enabling them to complete most of their planned projects. This contrasts with the last two winters, which forced some of this work into March and April.

Palokas believes that won’t be necessary this spring.

Cape Henlopen High School golf team coach Claudio Smarrelli is returning again this spring to help the Vikings improve their competitive prospects in the Henlopen Conference and in the State Championships. 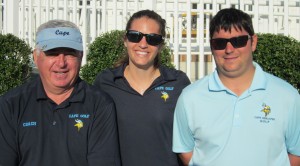 With several seniors departed from a very good 2015 team, Smarrelli and assistant coaches Samantha Purple and Sean Toner are looking forward to the contributions of returning Vikings such as Jack Ashby, Matt Zehner, and Brandon Harp.

Smarrelli hopes that girls and boys from 9th grade will sign up and join the squad, along with some from the older grades who could take advantage of the openings.

Smarrelli is also taking a page from the script used by other successful Cape team sports, by arranging for a March 18 scrimmage with New Jersey’s Westwood High School, at Kings Creek Country Club.

Cape has thirteen varsity matches scheduled this season, with the Sussex Academy replacing the annual game against Delmarva Christian Academy. This year’s Henlopen Conference Championship will be held at Cripple Creek CC, so I hope the Vikings have a chance to practice putting on very fast greens.