During last summer’s U.S. Open, I took a break during the third round and wandered into the merchandise tent.

Business was booming. It looked far more like the Rehoboth Outlets than a country club pro shop. The lines at the cashiers stretched far back, and the tables bearing merchandise emblazoned with the USGA logo were two to three-deep with shoppers.

Judy Bell sat in the middle of the huge facility with a big grin on her face.

The former president of the United States Golf Association has retailing in her blood. It was obvious that she thoroughly enjoyed the chance to witness two of her driving passions blended together, both for a good cause. 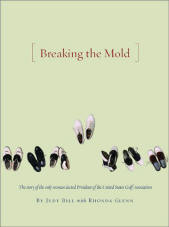 Breaking the Mold: The Journey of the Only Woman President of the United States Golf Association

Bell greeted the fans as she sat at a small table, with a stack of copies of her new autobiography, Breaking the Mold (Sleeping Bear, $22.95 SRP), just off to the side. After a short interval I introduced myself, and we had a nice chat.

That emotion was easy to detect as she looked at the hustle all around her. It was also apparent that this was a woman who simply loved to “visit with people,” as she put it.

There were no airs, no sense that the nobility had deigned to visit with the peasantry. Her interaction with the fans was both easy and direct, with laughter a common element of each encounter.

We talked about her current interests in addition to her book, such as her retail consulting and her continuing work with the USGA’s grants and fellowship programs. In just a few minutes’ conversation I felt like I’d known her for years.

I then met Rhonda Glenn, whom Bell described as the primary writer and “an excellent editor.” Glenn gracefully demurred when I told her Bell’s depiction of her role in the book.

“I’m just honored that she asked me to help her with it,” Glenn said. “She’s the most unique person I’ve ever met.”

“Judy has tremendous leadership qualities, but never loses her sense of humanity. She delegates what she can do herself.”

In working on the autobiography, Glenn said that Bell’s childhood was “fascinating.”

“I didn’t know about her interest in other sports. I knew she was a very good junior golfer, but I didn’t know she also helped form the first women’s basketball league in Wichita, Kansas, with 16 teams.”

As for the process of creating this book, Glenn said, “The hardest part was the geneology research, which took some time. Otherwise, my role was primarily editing. Almost all of it is just her words.”

Thanks to that short visit last summer, I could hear Bell’s voice as I read my review copy of this interesting book.

One of the reasons Breaking the Mold is so intriguing is because it’s not just the story of the first woman to attain such an influential position in the sport. Though probably unintended, it’s also a good example of the integration of women into American business and sports in the second half of the 20th century.

There are few cultures more conservative than golf in general and the USGA in particular. Even so, Bell’s personality was perhaps the main reason she was such a pathfinder for other women in sports organizations. As the book shows without directly making the point, Bell’s enthusiasm and drive to help the game for everybody, and not for any one segment of the golfing population, was the main reason she rose so far in the ranks of the organization. By the time of her selection as USGA president, it seemed completely natural that she should fill that role.

Bell now faces a different kind of difficult challenge, with her ongoing battle with cancer. Even so, her spirit and determination, as Glenn brought out in the editing of this autobiography, should be of tremendous help as she fights the ravages of the disease.