Golfers are like everybody else, in at least one respect.

During a recession, they have a natural reluctance to spend a lot of money on their favorite pastime.

As a result, the business of golf hasn’t been so hot lately.

For example, Top-Flite Golf, maker of the famous clubs and golf balls as well as the pricier Strata golf balls, recently filed plans in bankruptcy court to sell its assets to Callaway Golf. At the time of the bankruptcy filing, Top-Flite said its $250 million in sales was simply insufficient to manage its $530 million in debt. If the government and the bankruptcy court approve the deal, Callaway will obtain Top-Flite for $125 million, free and clear of debt.

National Golf Properties, the leading publicly-held real estate investment trust devoted to owning golf courses, went private earlier this year. The combination of millions in debt and problems with lease payments had more than a little to do with the conversion, which also involved American Golf Corporation, a related golf course management company.

On the other hand, some golf companies continue to do well. Callaway’s sales volume over the last twelve months topped $797 million. Share prices for Fortune Brands, the parent company for Titleist and Footjoy, now trade at more than twice the value set three years ago.

And in the Cape Region, two small golf companies are now seeing the benefits of working together to meet their customers’ needs. Like Humphrey Bogart’s Rick and Claude Raines’ Captain Renault in “Casablanca,” this could be the beginning of a beautiful friendship, helping both businesses ride out the recession. 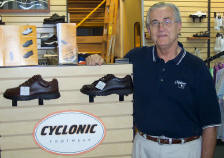 About a month and a half ago, Cyclonic Golf’s Sales Coordinator John Sarver dropped in on Ed Larkin, the head of Clubhouse Golf. Sarver said, “Ed and his crew do a great job. He makes his customers very comfortable there. We talked about what we could offer, and one thing led to another.” Shortly thereafter the first shipment of several Cyclonic golf shoe styles appeared on the shelves of the popular local golf shop.

Tom Mandel, the president of the Lewes shoe company, put it simply: “I like his store as a customer, and Ed is a complete gentleman. The way he runs the place is definitely an improvement over the outfit he once worked for.”

“As for getting our shoes in his store, the situation is just very special. We have a national network of sales reps, but we’d be foolish not to go after the local market. We’re definitely trying to do that, and we hope it works.”

For his part, Larkin was impressed at the attitude toward customer service shown by the Cyclonic staff.

“The best example of that was recently. One of our customers liked one of the Cyclonic styles very much, but we were out of stock in his size. He left us his cell phone number, and we told him we’d call him when it came in. Then we called Cyclonic. One of the girls there said she was coming down to Rehoboth, and would bring a pair down with her.

“We had the shoes in an hour. The customer was really surprised when I called him back so quickly. Frankly, I was surprised myself. I figured a 24 hour time frame would be great. Having them here in an hour? You can’t beat it,” Larkin said.

Mandel said, “Of course, that’s the kind of customer service that’s not going to happen unless the two operations are in the same neighborhood. But we were happy to help.”