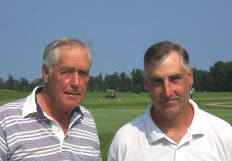 Herman (“Hump”) Schneider and his son John provide a good local example of this phenomenon. They are the hands-on owners of the popular Marsh Island Golf Club near Angola.

The family just celebrated the fourth anniversary of the July 1999 opening of their 18-hole course. On the other hand, the Schneiders have been in the golf business for many years.

Hump began as an assistant golf professional at Hercules Country Club near Wilmington in the late 1940s. His links career then took a side-step while he served in the military. Hump then worked for his father at a golf course in Pennsylvania, and came back to Hercules in 1962 as the head golf pro. He was a fixture at the then-company-owned course until he retired in 1985. Hump then worked at the Neshaminy Valley course near Doylestown, Pennsylvania, a public layout owned by other family members.

John played on the St. Marks High School golf team near Newark in the late 1970s. He also worked for several years at the Neshaminy Valley course, before helping his father search for suitable land in the Cape Region to build their own place.

“We came out here with John Lingo and walked the property. It was partially farmed and partially wooded. They had logged the place a couple years before. It was full of tops and stumps, and there was a lot to clean up before we could even begin to start building the place,” John explained.

Ross Harris, of Environmental Consultants International in Rehoboth Beach, did the wetlands delineation work and helped the Schneiders obtain the required permits. The family began building their course in mid-summer 1998.

“My dad did all the shaping of the greens and tees,” John said proudly.

Except for some mounding near their maintenance building, the Schneiders did not bring any fill material onto the site. Instead, they followed the building model adopted by many courses, by creating ponds and using the excess fill from the resulting holes to add features to the relatively flat landscape.

Anyone visiting the place would be impressed, as I was. It’s a fine-looking golf course, with great views of the adjacent Love Creek. The birds, rabbits and other local wild residents also add to the natural enjoyment of the course.

“Our customers often tell us how shocked they are at how beautiful it is,” John said.

Hump spends most of his days on the course, working alongside an enthusiastic part-time crew of predominantly former retirees. “After all those years of working for someone else, there’s a big difference doing this for yourself,” Hump smiled. “I kind of enjoy being out there.”

Of their part-timers, John simply said, “They’re the best crew I’ve ever worked with, hands down. And Dad treats them like family.”

John’s sons also contribute to the family business when they’re not in school or, in Michael’s case, serving in the U.S. Coast Guard. “Mike comes back every other weekend and really helps out. Brad works in the pro shop and everywhere else, and does a lot of the grounds-keeping. Andrew has some real skills. He can fix an irrigation pipe leak and you can’t even tell he was there when he’s done,” John said. “And I’m here all the time,” he grinned.

Brad was last year’s No. 2 player for the Cape Henlopen golf team. This fall he begins the Turf Management program at the Georgetown campus of Delaware Technical and Community College. Andrew is just starting to play competitive golf, and is also in the Cape marching band.

Like other Cape Region businesses, this year’s frequently wretched weather hasn’t helped the Schneiders. Nonetheless, Hump and John are determined to continue their hard work at making Marsh Island a well-liked Cape Region golf destination. “I’m still shocked when folks come in after a round and say, ‘We didn’t know you were here.’ And then they keep coming back,” John smiled.