Many golfers don’t realize how much they owe to a few forward-thinking individuals, whose pioneering efforts helped initiate the incredible growth in the sport in America since its modest beginnings among the Scots.

Even more don’t have any idea of the role that serendipity played in furthering those first stuttering steps.

For example, if a soda-fountain magnate had been more stubborn about his efforts to ameliorate the effects of tuberculosis, we might not have had the beauties of Pinehurst with us today. 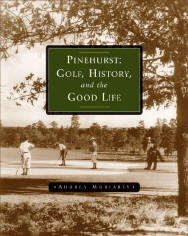 This story is among the themes explored by Audrey Moriarty in her enjoyable pictorial history, Pinehurst: Golf, History, and The Good Life, (Sports Media Group; $26.95).

Moriarty is the executive director of the Given Memorial Library and the Tufts Archives in Pinehurst. Her slim volume includes a fine sampling of the thousands of photographs from the Archives, providing a detailed social history of the famous Southeastern resort community.

James W. Tufts grew up in mid-nineteenth century Massachusetts, and was able to work his way up from a humble start as an apothecary clerk to the ownership of a thriving soda fountain business. He then became an early leader in the development of the American recreational industry.

Like many 19th Century magnates, Tufts was not content to sit on his millions and stick to his primary business. Instead, he acted on philanthropic impulses and bought a huge plot of timbered-over scrubland in the sand hills of central North Carolina. He was well along his chosen path of creating a healthy retreat for those suffering from consumption when he learned that tuberculosis was highly contagious.

By that time, however, fun-seeking guests at the then-modest resort were already whacking golf balls in nearby cow pastures. Tufts and his successors shifted gears and began changing their development plans to accommodate this growing interest in the sport.

The Archive photographs show how the original plan was conceived and then amended, helped along by some famous names in American landscape architecture, as well as golf course design.

The pleasant climate and surroundings were a huge factor in making Pinehurst a major golf destination. It certainly didn’t hurt that Donald Ross, one of the best and most prolific golf course designers of the early 20th century, called the little village home for so many decades.

Books such as this one and Stan Byrdy’s Augusta and Aiken in Golf’s Golden Age help golfers and others appreciate the historical underpinnings of the recovery of the American South after the Civil War. The leisure and tourism industry of the Carolinas, Florida, and elsewhere was a major element in the economic growth of the region, from the first few railroad-oriented resorts in the late 19th Century, to the thousands of golf courses that now dot the Southern landscape.

James Tufts may not have been thinking about golf when he first saw the Carolina sand hills. Nonetheless, Moriarty’s book should help avid golfers appreciate the fact that Tufts followed through on his plan to create a beautiful resort community, even if golf wasn’t part of the original scheme.

Time to Think About Joining a Club

Golfers who are new to the Cape Region might not realize that there are several private club membership opportunities in the area, in addition to several fine public golf courses. This note is the second in a short series describing the various country clubs that are open to membership applications.

Many Cape Region golfers drive over to the east side of Georgetown to play their home course, Sussex Pines Country Club, a short distance from the Sussex County Airport and the new Delmarva Christian High School. The partially-wooded par-72 course (par-75 for women) also features a sizeable dining facility that is popular for Cape Region weddings.

Currently there are no initiation fees. Memberships are available in different classifications, with annual dues including full access golf privileges ranging from about $2,000 for individuals to about $2,200 for family memberships. New members must also purchase a share of stock for $1,000.