Tumult of 1968 even reached the golf world

I have a vivid memory of one afternoon in April of 1968.

A ninth grader at the time, I often rode my bike in and around Skyline Junior High School, near the top of one of the higher hills in northern Delaware. There were great views of Wilmington and the Delaware River several miles away.

As a buddy and I rode near our school, we looked toward Wilmington. A huge cloud of smoke made it look like most of Delaware’s only major city was on fire.

It was vivid evidence of how many folks reacted to the news of the assassination of the Reverend Martin Luther King, Jr.

Golf was not in my life then, so I paid no attention to the 1968 Masters Tournament, held shortly after King’s murder. Curt Sampson was a busy young caddie in Ohio at the time, however, and he was full of speculation and careful consideration of the chances for victory among the top players, including Jack Nicklaus and Tom Weiskopf. 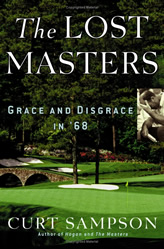 The Lost Masters: Grace and Disgrace in ’68

His own memories of that year’s events, including the screw-ups that led to the crowning of Bob Goalby as the 1968 Masters champion, are well-interspersed throughout his remarkable new book, The Lost Masters: Grace and Disgrace in ’68 (Atria Books; $24 SRP).

Those of us old enough to remember 1968 readily recall the incidents that shaped the nation during that turbulent time. We sometimes forget that far more folks today only know about that year from what they read about it.

Sampson integrates the sports story about the mortally-ill Bobby Jones, Goalby, and South America’s best golfer, Roberto De Vicenzo, into the broader tale about everyday life in the United States outside the pristine grounds of Augusta National.

For example, fairness was one of the most hotly debated themes of the era, a political goal with widely varying shades of meaning among those doing the debating. It was also central to the scoring controversy that marred the Tournament’s reputation that year.

The selection process for the Masters usually rewards repeat attendees. The early lines on the pros coming to Augusta in 1968 centered on the usual triumvirate of Nicklaus, Player, and Palmer, and gave short shrift to other golfers who had yet to win a green jacket, such as De Vicenzo and Goalby.

Sampson provides a sensitive character study of both golfers, describing their past and how it helped shape their approach to golf, competition, and their reaction to their shared history in the years after 1968.

Sampson also uses the caddie system then in place at Augusta National to show how different professional golf was then from what it is now. It also serves as a useful reminder of the racial dynamics of both the South and golf forty years ago.

The accepted wisdom had no apparent effect on De Vicenzo and Goalby, whose play at Augusta showed no signs of excessive attention to press clippings. De Vicenzo, a past British Open winner, played at or near the top of the leader board for the entire event. Goalby stayed close behind, fighting his hook, but outperforming his prior efforts in the Masters.

As Sampson shows, the high level of professional skill displayed by these golfers was not matched by the level of talent devoted to running the event. Flawed arrangements for reporting scores, in combination with the emotionally draining efforts by Goalby and De Vicenzo over the last few holes that Sunday, were a major cause of the famous rules controversy.

Complicating matters further, Bobby Jones remained in charge. The volunteers working the event turned to Jones for guidance, along with co-founder Cliff Roberts. We are left to wonder about the degree to which the official description of the decision-making process is accurate. Sampson clearly has his doubts about that, while supporting his own interpretation with careful analysis of the evidence.

You might not think that a single golf tournament, however unusual its history, could provide enough material for a full-length book treatment. Nonetheless, Sampson’s ability to incorporate the 1968 Masters into the larger picture of that unusual year makes this book a compelling social history, well worth reading.