The bustling Florida Gulf Coast cities of Tampa, Clearwater, and St. Petersburg are blessed with some fine golfing opportunities. I recently played three courses worth your consideration. 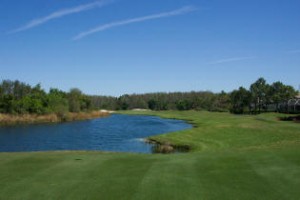 The 15th hole at TPC of Tampa Bay is the longest par-4 on the course, and the toughest, too. This view is from the back tees, a full 452 yards out.

The TPC of Tampa Bay sits on a beautiful piece of property several miles north of downtown Tampa. The Rookery’s Pete Oakley played here last year in the Outback Steakhouse Pro-Am, on the Champions Tour.

The starter told me the TPC fairways were essentially the same as when they were set up for this year’s Pro-Am a few weeks ago, but that the greens were no longer running at 11 or 12 on the Stimpmeter. Instead, they had slowed down to about 9 or 10.

It was hard to tell. This was my first experience with Bermuda grass greens, and when putting with the grain they were plenty speedy. I played the par-3 holes in even par, but the less said about a few other holes, the better.

The course itself was both gorgeous and challenging. Several greens were shaped to reward good approaches and punish the rest. I pulled a wedge shot to the left of a large mound on the green on the short par-4 fifth hole, and felt lucky to have the second putt stop 10 feet from the hole on the right side of the same mound.

The next day I drove up to Palm Harbor, site of the Westin Innisbrook Resort and Golf Club and its famous Copperhead Course. The PGA Tour has played the Chrysler Championship there during the last several autumns.

The course experience also included a local angle. Ken Straub is a former Milford resident and member of Shawnee Country Club. We renewed our acquaintance when I saw him working at the refreshment counter in the clubhouse. Straub moved to Florida a couple years ago, and it was a pleasant surprise to see someone familiar so far from home.

The elevation change throughout the course was the most startling thing about Copperhead. Even though the television commentators during the Tour events there always comment on this fact, it was still remarkable, thanks to TV’s perspective-flattening effect.

I didn’t drive as well as I did the day before, and frequently paid for those mistakes. Even when I hit the fairway, however, there were plenty of other reminders of the talent difference between the PGA Tour and a mid-handicapper like me.

I have a new-found respect for touring professionals.

In addition, when the starters remind you to keep your ball below the hole on the approach shot, do what they say. On the ninth hole I made a half-inch long putt from twelve feet above. It drifted to a stop hole-high, a foot away to the right.

After a pleasant evening watching the Phillies beat Toronto in Clearwater, the next morning I traveled to the University of South Florida, at the north end of Tampa, to play The Claw.

My overall impression of this layout was that it was similar to The Rookery Golf Course near Milton—but with alligators.

Some parts of this unpretentious layout were very well done. For example, the par-5 6th hole was a classic Cape design dogleg left, with a large pond giving players a choice of how much to cut off on the drive to shorten the approach.

My first drive on this hole proved that it’s entirely possible to draw the ball too much, directly into the pond.

Other holes weren’t so well-designed. The trees on both sides of the dogleg par-5 14th hole forced a very short tee shot so as to remain on the fairway. In my view, that’s a mistake.

On the other hand, for a popular low-priced golf course, the fairway turf was in fine shape, and the greens were very good. You should be prepared to take your time playing, however, at least during the busy spring season.

The Tampa region has a lot going for it, not least of which are its many fine golf courses. Perhaps on another business trip I’ll have a chance to play a few more.