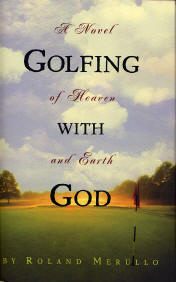 Golfing with God: A Novel of Heaven and Earth

I’m not sure what to make of Golfing With God: A Novel of Heaven and Earth, Roland Merullo’s new book (Algonquin; $23.95 SRP).

Perhaps my confusion, if that’s the word, has something to do with the fact that I don’t often equate playing golf with a mystical relationship to God.

There are more than a few occasions when God and I have a little chat while playing. Sometimes I’ll ask for his specific condemnation of an event, for example. More often, however, I’ll stop while playing golf to appreciate where I am and what I’m doing, and simply give thanks.

Roland Merullo goes way, way beyond that in this intriguing novel.

The central human character is Herman Fins-Winston, an English émigré to America who much prefers the nickname Hank. He’s not so keen on using his full surname, either.

Winston narrates the story, and makes it immediately obvious that he’s dead—or at least, he’s been dead in a past life or two. He is enjoying his afterlife in a heaven that includes playing and teaching the sport at which he once participated as a PGA Tour golfer, and for years thereafter worked as a country club pro.

His past career was a bit of a disappointment, however, and not only for Winston. Several others also had a keen interest in his development as a golfer, for reasons I won’t spoil by recounting here.

One of God’s staffers asks Winston to help a very special golfing student—it’s God, and He/She has the putting yips. Winston agrees, and the book takes off from there.

As happens repeatedly in the novel, the expressed intentions of the characters should not always be taken at face value. There are multiple motivations. Winston eventually comes to understand and appreciate them, and then integrate them into his choices of what to do and how to act.

Winston’s explanation of how humans qualify for entry into heaven will not please adherents of several major religions. At one level, it almost seems too easy. Then again, the book’s emphasis on a type of reincarnation theology could be summarized with the old adage, “If at first you don’t succeed…”— even if it takes millions of past lives.

Winston and God eventually return to Earth, the only suitable place for this special Student to improve His/Her game when in human form. The duo take a road trip to several well-known golf resorts, such as Ford’s Colony in Williamsburg, Virginia and Pawley’s Plantation in South Carolina. It eventually dawns on Winston that the need for lessons was yet another misdirection ploy.

His own improvement as a player ultimately prepares Winston for a significant golf match at another resort in Georgia, and for an even more important round at Greenbrier in West Virginia.

Fiction writing often calls for the willing suspension of disbelief–some books more so than others. This novel pressed that point about as hard as any golf story I’ve ever read.

On the other hand, it also presented a coherent, consistent, and challenging way of thinking about golf, our lives here on earth, and what may await us after we pass from this place.

A little too carefree

During the final round of this year’s state high school golf championship, I saw a young golfer from Red Lion Christian Academy do something on the 18th hole that should make many older golfers wince in sympathy.

The boy’s first putt from about 25 feet away rolled up about four feet short. His second putt slid by the hole and stopped about a foot past. He walked up toward the hole, reached across it with his putter, and calmly swept the ball with a backwards pull.

The look on his face was priceless. The idea of missing that little sweeper obviously never occurred to him.

This tiny yet brutal lesson in being careful with each stroke is something nearly every golfer experiences, but usually in far less significant circumstances.