A special set of Ten Commandments

In 1988 an American minister named Robert Fulghum published a famous and hugely popular short essay called “All I Really Need to Know I Learned in Kindergarten.” 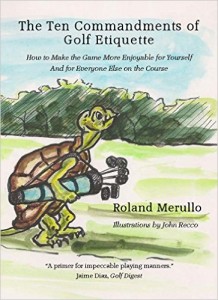 The Ten Commandments of Golf Etiquette: How to Make the Game More Enjoyable for Yourself and for Everyone Else on the Course

That same flair for brevity is on fine display in a new book, aimed at beginning golfers and, perhaps especially, those who could do with a little refresher course

The short essays on each commandment describe what’s expected of golfers, as well as the rules that help provide much of the game’s inherent appeal. None of it should be news to anyone who’s played more than a few rounds of golf, but as a primer for those just taking up the sport this is a very good introduction.

“Thou Shalt be Quiet”, “Thou Shalt Manage Your Mood”, and “Thou Shalt Learn the Rules” are three of the ten rules for gracious golf, and are among my favorites in this tiny little treatise.

The one about managing one’s mood is the one for which I could use some additional study. As Merullo says, “If you hit a bad shot, made one comment, then shake it off.”

Very good commandment, and one I try to follow. On the other hand, I think that the “one comment” should be thought, and not necessarily said out loud, or at least muttered to oneself. No one needs to hear a “[blank] Me!” immediately after one of my errant drives–other than myself.

I can easily see this slim volume bought in mass quantities for use by forward-thinking golf pros, or perhaps for high school golf team members in the first week of each season.

A bit of putting practice

Just before teeing off in the Saturday round of the 2015 U.S. Women’s Open, LPGA golfer Kim Kaufman hit the putting green and kept to a single practice regimen.

She placed a single tee about 10 feet below a hole, and then set two more tees next to each other about 9 feet from the hole. The two tees were about 2 inches apart.

Kaufman putted ball after ball from the single tee spot, through the “gate” and toward the hole, adjusting slightly for those veering right or left. Most went straight in.

If you are having alignment, stroke, or aiming issues with your putting, you might consider the same practice method. I’d suggest setting the tees a few inches apart at first, moving them closer together as your skills and confidence grow.

The club donated $1 from each of the 470 weekend rounds played, and encouraged Individual donations throughout the three day event.

The Folds of Honor Foundation provides scholarships to families of soldiers and military personnel who have become disabled or lost their lives in the line of duty. In the last eight years, Patriot Golf Day raised more than $27 million, supporting more than 7,500 educational scholarships for military families.

“It is an honor to be able to help the families of those heroes who have fallen or been injured in the line of duty,” said Donald DeMasters, Peninsula Club General Manager. “This is a wonderful opportunity for our Club and Community to give back to those who have given everything.”

Sussex Pines Country Club held its Couples Tournament Sept. 19-20. Alan and JoAnn Foster won first place, with John and Nancy Terranova taking second and Ron & Brenda Lewes, the 2014 champions, coming in third. Gary Allison won the closest to the pin contest for the men on both days. Kathy Hudak won the contest on Saturday for the ladies, while Jenifer Hagy won the Sunday contest.