Notes from the U.S. Senior Amateur 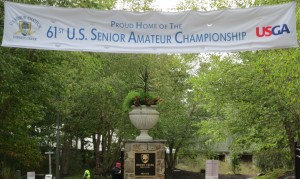 It was a great opportunity to watch very good golf played on a very challenging golf course, and close to home at that. It also generated several stories highlighting many different aspects of the game, which I’ll be telling you in upcoming weeks.

The tournament began with 36 holes of stroke play Sept. 26-27. The top 64 went on from there to several rounds of match play, culminating on Thursday, Oct.1.

Over 2,300 golfers tried out for the Senior Amateur in local qualifying tournaments during the past summer. Players had to be at least 55 at the start of the Championship rounds. A few of this year’s Championship competitors were in their early 70s.

The par-71 18 holes at Hidden Creek, designed by Bill Coore and Masters champion Ben Crenshaw, stretched over 6,700 yards, and carried a course rating of 73.4 and slope rating of 135.

On that first Saturday morning, I followed three gentlemen who had never met before reaching the first tee.

John Howson, 56, lives in Sparks, MD, but is a proud North Yorkshireman. He was the reason why the English flag flew at the large scoreboard by the clubhouse, next to the U.S. flag and those from Canada, Hong Kong, and Mexico.

Howson is a vice president in charge of engineering for DeWalt, and an accomplished amateur golfer on his vacation days. A repeat winner of the Maryland Senior Open and Senior Amateur, he has also competed in the U.S. Senior Open.

Monty Guest, 57, of Solon, Ohio, is the president of a building restoration company in Cleveland. He won the senior division of the Northeast Ohio Amateur, and is a past club champion.

B. Shawn McLoughlin, 72, of Newtown, CT, owns a pre-cast concrete company in Bethel, CT. He is a top amateur golfer in his home state, with multiple wins in the New England Senior Amateur and other tournaments.

Their rounds started well. Helped by a strong following wind and firm fairways, Howson and Guest’s opening drives bounced and rolled well over 70 yards beyond the initial carry to about 100 yards out on the 385-yard par 4. Guest made birdie, while Howson pushed his first putt a bit right and finished with a par.

Howson later admitted to a bit of nerves, pushing a few more putts and having trouble reading others. He relaxed and played better as the round progressed, with a fine birdie on the 582-yard par-5 ninth hole, into the wind. He also made seven pars and two bogeys on the back nine, finishing with a 206-yard second shot to the 18th green for a 2-putt par.

McLoughlin was the short hitter in the group, with tee shots into winds of 20 knots or more a major problem. In a post-round interview he admitted that his age was finally taking a toll. “I don’t hit as far, and so everything I hit has to be perfect. I can’t miss shots, and I was,” McLoughlin said. His drive into the trees on the 441-yard par-4 12th led to the only triple bogey of the day among the group. McLoughlin played the par-3s well, however, including pars on the 202-yard 4th and the severely uphill 121-yard 11th.

Guest was usually had the long ball off the tee. However, swirling winds on the tree-lined course sometimes pushed or pulled his irons off-line, turning some likely pars into bogeys. “It was a frustrating golf course. I could not figure the wind,” he said.

The best hole of the day for Guest was the 500-yard par-5 17th. His second shot, from 250 yards out, stopped on the green pin-high and 40 feet left. The eagle putt came close, making the birdie a simple proposition. Guest’s greenside bunker shot to 2 feet on the fourth hole, followed by his putt for par, was the best of the day out of the sand for all three golfers.

They chatted amiably during the round, and were completely cordial as they left the scorer’s tent. Each relished the chance to play at this level, and also made clear that this tournament was not life-or-death for them. That kind of graciousness is not always present, and is therefore all the more appreciated.

Howson finished with a 76, and shot 75 the second day to tie for 64th. He and 10 other golfers with the same score lost in a Monday playoff for the last spot in the match play rounds.

Congratulations to the folks who ran this year’s Andrew Geyer Memorial tournament, held Sept. 25 at Rookery North. The event raised over $9,000 for the Andrew Joseph Geyer Endowed Scholarship, established at Wesley College in Dover.

The Sussex Pines Ladies 18 Hole Golf Association played a Best Ball of 3 or 4 round on Sept. 22. Linda Townsend took first place, followed by Barbara Willin in second and Dee Prillaman in third. The group also played a Hybrids & Irons Only round Sept. 29. This time Brenda Lewes won, with Terry Daisey in second and JoAnn Foster in third.