Golf and charity have gone hand in hand for decades, but it’s not immediately obvious why that should be so.

Maybe it has something to do with the amount of time it really takes to play golf. If you didn’t have to walk or ride for the usual six-mile jaunt, and could just stand there and hit or putt a ball to a series of 18 targets surrounding you, it would take about 15 minutes.

Instead, golf is made up of hours of walking around outside, interspersed with seconds of action that generate a lot of enthusiasm, of the well tempered and not-so-well tempered varieties.

During a round of golf, therefore, you have time to think, and not just about yourself. You are also typically in beautiful surroundings, often among friends, and thus in a position to be reminded how lucky you are to be enjoying this particular pastime.

Remembering how good you have it usually helps remind you that others don’t, and that you should do something about that if you can. And that may be why golf has such a strong connection to charitable impulses.

The dollars raised on the national tours, such as the PGA Tour or the LPGA, are impressive. However, the really huge money for charity comes from the millions raised each year in local golf events nationwide.

The Cape Region golf clubs runs dozens of such events each year, for both national and local causes. One of the newest such tournaments recently took place at The Peninsula Golf & Country Club near Millsboro, and I was pleased to accept an invitation to participate.

Clothing Our Kids (COK) was founded by Peninsula resident Mary Rio in 2012. The 501(c)(3) organization supplies school clothing to elementary school-aged children in need, focusing on the kids in Sussex County.

Rio and her hundreds of volunteers work closely with school counselors and social workers, who act as the link between the charity and the eventual recipients. Children from every elementary school in the Cape District, along with 28 other schools and community centers, have been helped by this charity.

Soon after Rio started COK, the inventory of donated and purchased clothes took over most of the available storage in her home. With thousands of items distributed each year, the organization now uses a warehouse facility to gather, process, and distribute the pants, shirts, shoes, and other school-appropriate clothing.

In 2014, someone suggested that Rio hold a golf tournament fundraiser at The Peninsula. On very short notice the club and its resident members put on their first such event, and raised $12,000 from about 60 golfers and sponsors.

With a full year to plan, the second annual Clothing Our Kids tournament took place October 12, with 116 golfers playing an 18-hole scramble. About half of those participating live in The Peninsula, a nice sign of support for Rio, their neighbor and friend.

Staff of The Peninsula actively participated in the event, along with a few dozen volunteers helping run the tournament, such as Chuck and Kate Gibson. Dozens of supporting sponsors chipped in to build up the total raised, well beyond the $150 entry fees paid by the golfers. 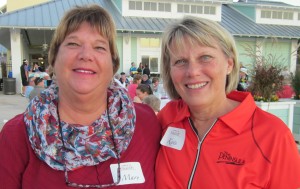 Rio and the volunteers were also busy selling 50/50 tickets, raffles for some very nice gift packages worth over $500 each, mulligan sales, and a putting contest on the slick practice green. It all added up very nicely, for an eventual total of $31,631. As Kate Gibson noted, “$31,000 will buy a lot of clothes! It’s incredible!”

Donald DeMasters, The Peninsula’s general manager and a former club pro, led our group. The team also included Bob Carson and Diane Brode, Maryland residents and friends of the Gibsons. Carson’s wealth advisory firm was among the sponsors, and his logo’d golf towels came in handy.

DeMasters must have been exhausted by the end of the round, because he carried the three of us all day, leading to a second place finish in the tournament.

If you have a chance to play in a charity golf tournament, I recommend it. You will make new friends, enjoy the day, and spend your golf time and money very wisely, for some very good causes.

For more information about Clothing Our Kids, including donation options, go to www.clothingourkids.org or call 302-864-5437.