Cape High golf team back at it for 2016 season

The first week of practice for the 2016 Cape Henlopen High School golf team began March 1. There was a cold familiarity to it, what with the recent four inches of snow messing up plans for a full week of activity.

For that reason, this year’s second week of practice began on an unfamiliar, but comfortable note.

When I met Coach Claudio Smarrelli and Assistant Coaches Sam Purple and Sean Toner at Rehoboth Beach Country Club on Monday, March 7, it was a lovely, sunny, relatively warm 60 degrees. The forecast for the rest of the week promised even warmer conditions for the young squad. 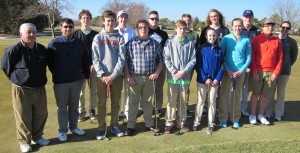 The 2016 season gives every appearance of being a rebuilding year for the Vikings, with a large crowd of 2015 seniors making way for a group of mostly freshman and sophomores.

Jack Ashby is the only returning senior varsity member from 2015. He and the golf coaches are awaiting word on his recovery from injuries from soccer, before Ashby is a sure thing for golf action. Barry Staebler is the other twelfth grader trying to make the team.

Among the juniors, Matt Zehner returns to the varsity, one of Cape’s standout contributors in the 2015 state championship tournament. Brandon Mills is the other eleventh-grader joining the Vikings this year.

The sophomore golfers include Brandon Mays-Harp, who came out for the team last year, as well as Kyle Monigle and Brendan Wick.

The Vikings will play a pre-season scrimmage March 18 against New Jersey’s Westwood High School, at Kings Creek Country Club. The formal season begins March 23 with a match against Sussex Academy, replacing the annual game against Delmarva Christian Academy, followed a day later with a match against Laurel High.

Sometimes the Cape Region connections with a golf equipment company are a pleasant surprise.

When I introduced myself to New Balance sales rep Jackie Beck at the 2016 PGA Merchandise Show in January, she told me she had just been down to Rehoboth Beach last October.

Beck not only works for New Balance–the former Division I standout at Illinois State is also the golf coach for the women’s team at Central Connecticut State University.

The Blue Devils finished in 12th place in the University of Delaware’s Lady Blue Hen Invitational. Beck was highly complimentary about the RBCC course and the Rehoboth area.

We had a nice chat about how difficult Rehoboth CC can be in the wind, and what a challenge courses like it present to college players who are more familiar and comfortable with bomb and gouge layouts.

As for the golf shoes, Beck concentrated on discussing two different offerings. 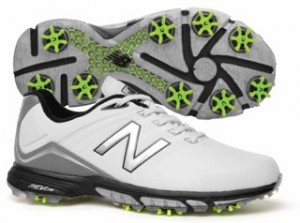 The New Balance 3001 golf shoe is an athletic-style cleated model, new for 2016.

The multi-spiked New Balance Golf 3001 is new this spring, with “microfiber leather uppers,” as Beck described them.

As with other New Balance shoes, these models come in extra wide widths, which is not always true about other golf shoe brands.

Beck said the MSRP will be $189, but she expected a discounting of that price at outlets such as Golf Galaxy. 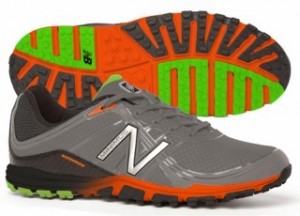 The New Balance spikeless Minimus golf shoe is one of the company’s best sellers.

The “uncleated” or spikeless shoe is also remarkably lightweight, because it comes with a much thinner insole than most other models.

Also available for wide feet, the Minimus has a suggested retail of $119, with discounting from that level by the larger golf stores.

The New Balance store on Route 1 in Midway has carried golf shoes in the past. This week the store staff said they should be receiving their allotment of golf models very soon.