Junior Matt Zehner earned medalist honors once again with his 42, with Delmar’s Helen Wilson and Jim Wood tying for second overall with their 48s. Zehner said he had no birdies, just a “mix of pars and bogeys.”

Freshman Dane Palmer was second best for the Vikings with his 56, followed by senior Barry Staebler’s 59. Staebler said, “We’ve been playing in a lot worse conditions that I am used to. It was really cold and windy.”

Ninth-graders McGreevy and Reed Jones tied for fourth spot for Cape with 65s, while Saxon Kalb slipped badly to a 73.

Smarrelli hopes his young teammates closely observe the golfing skills displayed by Zehner, and not just for his 275-yard drives. The junior standout is also worth watching for his course management, as well as chipping and putting.

Smarrelli also also thinks that warmer weather will help the squad. On the other hand, the veteran coach is also realistic. As he said, “It takes more than 90 days to make a good player.”

It’s been a while since Cape fielded such a young squad, but it’s not unprecedented. As Smarrelli noted, the 2015 team, full of seniors, originally began playing for Cape as a pack of six freshmen.

That gives Smarrelli hope. “One step at a time, patience and practice will get positive results. Before you know it we could have a winning record, and the following season perhaps a 12-2 record, the same as the 2014 and 2015 teams,” he said.

Senior Jack Ashby is still expected to return to the Cape golf team, recovered from soccer-related injuries that held him back from golf for the first month of the season. In addition, an experienced sophomore transfer student, Michael Bollig, joined the team April 8. 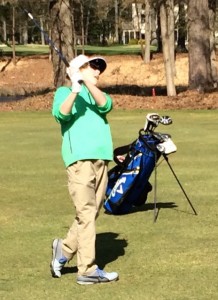 Bollig, a sophomore, comes to Cape from Naperville, IL. While there he played in Illinois Junior Golf Association tournaments. “I started playing golf when I was 8, and played all over the place,” he said.

With his flat-brim Puma hat, sunglasses, and fairly short stature, it was easy to understand why Bollig’s Illinois buddies gave him the nickname “Ricky”—as in Fowler, a hugely popular PGA Tour golfer, especially with juniors.

I joined Bollig, Zehner, Palmer, and Coach Smarrelli during a practice round April 11 at Kings Creek CC. Seeing the over-6 foot Zehner standing next to Bollig made me think immediately about what good friends Fowler and Masters winner Bubba Watson are, and told the boys. I think they liked the comparison.

Bollig’s golfing talent showed, on a course he’d never played. He’s not a long hitter, but his short game skills easily make up for it. Palmer also shows promise, if he can learn to slow down his backswing a bit to give the ball a chance to go where he wants it. His wedge shots already have a nice height to them, which is a good sign.

The Vikings then traveled north to Maple Dale Country Club April 12 to play Dover High. They lost a close match against an equally young team, 206-211, after a rainy day that threatened to force a postponement.

Zehner won medalist honors with his 48, a round he said was his worst total since a round last spring. “I went OB on the 17th hole. My drive hit some trees and it bounced out,” he said. “The greens were really wet and sandy. You had to do a lot of guessing.”

For example, Zehner missed a birdie putt on a par 5. A couple more bounces and a lip-out converted that hole into a double bogey.

Staebler shot a 52, his best score thus far in competition. “I finally started driving better off the box,” he said. “But the greens were punched, soaking wet, and very sandy. That made it really hard.”

Palmer also shot 52, and was especially disappointed in his last two holes. “I went OB twice on the 17th hole, and lost a ball on my tee shot on the 18th. Other than that I was playing better,” he said.

Kalb’s 59 completed the Viking team total. “I couldn’t putt worth anything,” he said.

Smarrelli believes the addition of Bolling and Ashby will help “add some depth” to his very young team. Playing alongside talented golfers can’t do anything but help with their development, especially during the team practices.