A pilgrimage to Pinehurst and Donald Ross courses

The 2016 edition of the Golf Writers Association of America Tournament returned to Pinehurst, NC, in beautiful spring conditions.

As in past years, Pine Needles-Mid Pines Resort played host for the event, with two of the rounds played at the venerable hotel complex’s Donald Ross designs (910-692-2114).

A small but enthusiastic crowd of golf writers began the tournament at Pine Needles, home of three U.S. Women’s Open Championships, the last in 2007. The regular tees earn their 120-slope rating for the par-72 layout, with most of the familiar Donald Ross design elements present throughout the round.

Shots that miss the green tend to roll farther away, thanks to closely mown areas that encourage a longer recovery from a slight mishit. Chip shot accuracy onto the green is a must, because the crowned surface will let a ball hit a bit too hard run out longer than expected. Putting from off the green is a good strategy for most players. 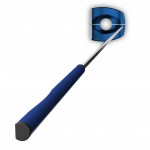 Our second round, at Southern Pines Golf Club, included a contingent from BioMech Sports. The company is a relative newcomer to the golf business, with its AccuLock ACE putter the first product now available.

Southern Pines could do with a little more TLC, especially on the mix of paved and unpaved cartpaths. As a 1906 Ross design, however, it had its charms. A hillier layout than Pine Needles or Mid-Pines, many Southern Pines holes led down to the fairways, and then uphill to the greens, which were in good shape.

We chatted after the round, and discussed Slocum’s continuing charitable efforts on behalf of the Crohn’s and Colitis Foundation. He went through a bout with ulcerative colitis early in his career, but has recovered well.

The group’s Friday evening dinner included a presentation from BioMech CEO Frank Fornari, who brought an impressive zeal to his discussion and demonstration.

Several of us tried the putter after his talk. The design forces you to place the extended shaft against the left forearm, with the ball set much further back in the stance, and with a more upright posture.

Fornari says the posture change is deliberate, to prevent back problems resulting from the usual putting stance.

I hit enough smooth 20-footers to convince me that they are onto something, especially for golfers who believe their putting stats are due for improvement, or who already have back issues.

Our third round returned to Mid-Pines, one of my favorite golf courses.

I’m not alone in my assessment. More than one of the golf writers during this trip told me that if they could only play Pine Needles and Mid Pines for the rest of their golfing lives, they would be perfectly fine with that.

Our first nine holes took place in a steady but relatively light rain, forcing the usual extra steps to keep grips and clubs as dry as possible, while corralling balky umbrellas between shots. 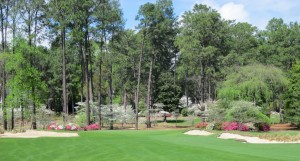 The green at the 376-yard par 4 16th hole at Mid-Pines is framed by dogwoods and azaleas, a beautiful sight in the spring.

As we came to the 10th tee, however, the rain stopped and the day turned simply gorgeous. The dogwood trees and azaleas were in bloom, framing several holes in beautiful white and pink colors against the green turf.

There’s nothing tricked-up about Mid-Pines. Any mistakes are your own, and can’t be blamed on the course, which is not always true about some other places. On the other hand, good putts are always rewarded, and good bunker play sometimes even more so.

Current plans are to return to Pine Needles and Mid-Pines for next year’s GWAA Tournament.

Among the clubs available for try-outs will be Titleist, Nike, Cleveland, and Tour Edge.