Between grass and trees, go for grass every time (Part 2)

Mark Haschemeyer is the course superintendent at Kings Creek Country Club. The Southern Illinois graduate actively follows the same approach to trees and course restoration as promoted by well-regarded golf course architects such as Keith Foster, the subject of last week’s column.

That’s not just a coincidence.

Haschemeyer worked at Wilmington Country Club when Foster did his renovation work there. He saw firsthand how a judicious approach to tree removal does wonders for a course’s appearance, turf health, and aesthetics.

For example, at Wilmington South Foster cleared one area of trees almost entirely, but kept in place some specimen trees that were set back from the former forest edge, and which had been hidden from view. Haschemeyer said the members and staff didn’t realize what nice trees were there, and now on display—but without really affecting how the golf course would play.

Kings Creek CC first opened in 1990. Trees edge much of the layout, especially where the fairways were cut though forests as part of the design. In other locations, white pines were planted near the greens, and tulip poplars are commonly found on much of the acreage.

These poplars weren’t there when the course opened. They are well known for growing quickly but not strongly, making them vulnerable to the elements.

Kings Creek’s low-lying areas were also invaded by phragmites, an invasive species that crowds out lower-growing native grasses. Phragmites is difficult to remove, but if left untreated can slowly fill in ponds needed for irrigation and stormwater control.

Haschemeyer showed me some of the work he and his crew have done. A few of these changes are truly dramatic, and also hugely pleasing from an aesthetic perspective. 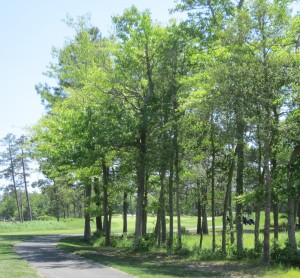 The green is clearly visible through the trees on the right side of the fairway of Kings Creek CC’s par-5 second hole. That is a recent improvement.

The par-5 second hole used to have a low-lying marshy, densely treed area off to the right side of the fairway, about 100 yards from the green. It was also a green and brown wall, blocking any view of the hole if you were unfortunate enough to be in the right rough or right edge of the fairway.

It’s still not an area you want your ball to visit, but you can now easily see through it to the green beyond.

The visual treat continues on that hole, because of significant clearances made on the backside of the green. Golfers now have a great view of Rehoboth Bay to the south, and can even see the new Indian River Inlet Bridge at the horizon.

These changes are a major visual improvement to the course, and also eliminated turf problems on that green and the adjacent 3rd hole tee box. “That’s one of my best greens now,” Haschemeyer said. 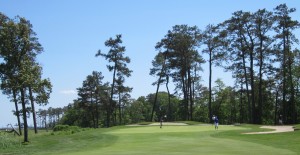 The par-5 second hole at Kings Creek CC, much improved since completion of a major tree and underbrush removal project.

Haschemeyer and his crew removed hundreds of trees in strategic locations throughout the course, improving the grass as well as the playing characteristics of the course. Underbrush removal at holes such as the par-3 5thth hole not only make the course look much nicer, but also make possible fresh breezes that now reach the turf (and the players), blowing away bugs that take advantage of too-still conditions.

The phragmites removal work is most impressive at the par-4 6th hole, where a low area separates the tee boxes from the fairway. In the past, phragmites blocked the view of the fairway, and forced golfers listen to their ball’s flight to guess if their drives were a bit short. 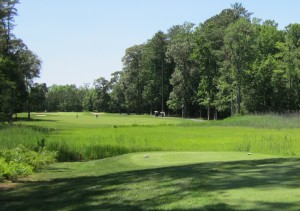 Following DNREC advice, Haschemeyer restored the native grasses, making the hole not only far more visually appealing, but also restoring a clear sight line to the fairway beyond.

On a golf course as formerly forested as Kings Creek Country Club, tree removal and underbrush clearing will never be as dramatic as what happened to Oakmont, which was wide-open farm property before it opened in 1903.

Nonetheless, the thoughtful elimination of unneeded trees from Kings Creek will help keep the golf course and its turf in beautiful playing condition, while leaving thousands of other trees in place to enhance its appeal.

Congratulations to Billy Hurley III, winner of the PGA Tour’s Quicken Loans National tournament at Congressional Country Club in Bethesda, MD. It is the Naval Academy graduate’s first win on the Tour.

The former Lieutenant was also a standout golfer for the Midshipmen. In the Rehoboth Beach Invitational at Kings Creek CC, hosted by George Washington University, Hurley tied for 7th in 2002, in which Navy finished second. In 2003, he tied for second place, and Navy won the team title.

Scott Allen, the GW golf coach at the time, praised Hurley as “a great guy and a pleasure to coach against.”

The Kings Creek Ladies 18 hole group played their Far Out game June 21. This format throws out all par 5 scores to rank the players.