During the 2016 ShopRite LPGA Classic Presented by Acer, I followed Susana Benavides, a young Symetra Tour golfer, as she struggled to a six-over par finish for the first round.

Her four birdies were more than offset by four bogeys and three double bogeys. Hitting out of the deep rough was an adventure every time she tried.

What I did not know until a post-round interview was that Benavides played with a stress fracture in her left arm, diagnosed only a few weeks earlier.

Benavides is the only Bolivian on the LPGA/Symetra Tour circuit, and feels an obligation to represent her country in the sport as best she can.

Playing the ShopRite tournament wasn’t part of her original schedule, but she seized the opportunity when it presented itself. Benavides was among the extra golfers brought in to help with the pro-am part of the tournament, because there are far more pro-am groups than the tournament player contingent can handle.

“I found out last night. I got a call, and they told me I was the first alternate, and I wasn’t even on the alternate list. I was so nervous. I didn’t sleep all night,” Benavides said. 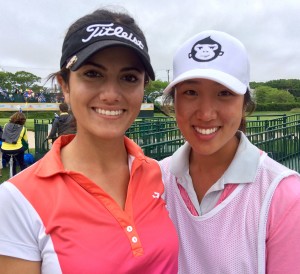 Susana Benavides (left) with Sky Seo (right), a fellow Symmetry Tour player. Benevides played in the ShopRite Classic, with Seo caddying, despite a stress fracture in her left arm.

That alternate slot turned into a playing spot, so she called Sky Seo, a buddy and fellow Symetra golfer who also played in the pro-am. The former University of Oregon golfer jumped at the chance to caddie for her friend.

Benavides graduated from The Ohio State University with a degree in communications. She played on the Buckeye women’s golf team all four years, recruited to attend after two years at the IMG Academy in Bradenton, FL. Benavides has been on the Symetra Tour for a few years now, trying to make the LPGA Tour like so many other ambitious young golfers.

Benavides said her stress fracture came from “just overuse–overplaying, overtraining, just too much.” She also said “I have to take off for eight weeks and I can’t do that right now, so—-.”

She played in a Symetra Tour event the week before ShopRite, is going home to Bolivia for a week, and expected to return to Symetra Tour action the week after in South Bend, Indiana.

Benavides said she received treatment from Cliff Steagall, a physical therapist with the Symetra Tour. “He’s been great. It hasn’t gotten worse, it’s actually gotten a little better, but I still have it.”

The injury altered her approach to her usual warmup routine. “I think that without wanting to and without thinking about it, I did change, because every time I was hitting I was having pain, so I tried changing it a little without noticing, so now I’m having a hard time getting back to where I was,” she said.

I noted that her drives during the round were in the 220-230 yard range, and asked if that was normal. It isn’t.

“I’d say I hit it 245 on average, but I’m not looking at my distance, I’m not thinking so much about my shots. I’m just glad I’m able to finish the rounds. I don’t want to push it too hard, and I don’t want to be so tough on myself. I know I can do better, but right now I have to take what I have,” Benavides said.

Benavides’ golf bag featured a Yoda putter head cover, and her driver head cover was a faithful replica of the BB-8 droid from the latest Star Wars movie. Perhaps her recovery will be hastened by recalling how to use the Force–or not.

Benevides missed the cut at the Shoprite, and again at the next Symetra tournament, but tied for 18th at that tour’s Tullymore Classic in Michigan on July 3. Injuries have to heal on their own schedule, but Benevides’ determination to play through that process risked prolonging that recovery.

Most golf amateurs don’t face the same risk of overuse injuries as a struggling tour pro. There’s little or no reason to play through the pain, if you’re don’t need to make a rent check by making birdies. Just take a break from golf and let yourself heal.

The 9:00 a.m. shotgun scramble start is preceded by registration, the practice range, and a light breakfast. Lunch comes after the round, with a silent auction and the 1:30 p.m. award reception. Driving, closest to the pin, and team prizes will be announced, along with the results of a putting contest.

Considering how many of this year’s Cape Region demo days were postponed by bad weather, I should check the radar before heading over.