The travel distance didn’t seem to dissuade Cape Region golfers from participating, however, with several locals making the trek north to compare their skills to the rest of the state.

The three-round event featured a cut after the first 18 holes, which became 5-over par on the hilly, par-70 layout.

Peter Barron of Baywood Greens led all golfers after the first two rounds with a 6-under par performance. He shot one-under par in the third round and held on for the victory by 3 strokes over Jay Whitby of Wild Quail Golf and Country Club.

Barron is also a member of Stone Harbor Golf Club in Cape May Court House, NJ, and an avid competitive amateur golfer in the Philadelphia region.

Chris Krueger, the teaching pro at Kings Creek Country Club, finished in seventh place with a 3-over total for the 54 holes.

John R. Lynch and Greyson Rossi, of Cripple Creek Country Club, tied with others for ninth place, at 6-over par. Neil Maurer of Bear Trap Dunes finished in 13th place at plus-7.

Ed Brown of Rehoboth Beach Country Club shot 9 over, in a tie for sixteenth. Rookery South assistant golf pro Chris Osberg tied for 30th with his 16-over total.

Congratulations to Bud Hitchens for his hole-in-one on the fourth hole of the Kodiak Course at Bear Trap Dunes July 14. Hitchens said the tees were set at 128 yards, and in understated fashion, remarked that the “temperature was hot that day.”

Not sure there was a day this past July that wasn’t hot.

Matt Zehner is touring a few college campuses this summer, as he heads into his senior year at Cape Henlopen High School. The Viking golf team captain took advantage of the opportunity during his Clemson University visit to play in a Hurricane Junior Golf Tour event July 18-19, along with 30 other boys, at Clemson’s Walker Course.

Zehner admitted to struggling a bit the first day with his 82. His second round was much improved, helped along by his hole-in-one on the 155-yard par 3 fourth hole. Zehner’s 75 on the 6,911-yard layout led to a 6th place finish in the tournament.

A Day at the PGA Championship

My brother Tom, who’s now a New Jersey guy, managed to obtain two tickets for the Wednesday practice round for the PGA Championship at Baltusrol Golf Club, in Springfield, NJ. We had a great time.

Practice rounds are far more relaxed than when the tournament begins in earnest. Several pros out on the course even took breaks between holes to sign autographs, such as Tony Finau. Jordan Spieth would have never finished his practice round if he did that, however. Between the 11th green and the 12th tee he announced in a polite but firm voice that he would only sign stuff at the 18th hole, when he finished. Most folks seemed satisfied with that compromise. 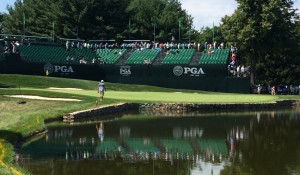 The 200-yard par 3 fourth hole at Baltusrol’s Lower Course is perhaps the most well-known hole at this mulitple-major venue, home of the 2016 PGA Championship won by Jimmy Walker.

Tom and I wandered around the course without sticking to the hole configuration, enjoying the shade trees and the breeze in the hot, muggy conditions. We could also see why the par-3 fourth is Baltustol’s signature hole, and why the PGA put up a 2,500 seat arena there. It’s not only pretty to look at, but it’s also a challenging greens complex just past the pond in front.

Practice round tickets are often cheaper that what’s available during the tournament. If you’d like to see the course with less fuss and bother, check out this option for upcoming pro tournaments. You might be pleasantly surprised.

Carole Ellison won closest to the pin honors on the eighth hole.

Wendy McClay won first place in the first flight, followed by Deb Ward in second and Jean Chlastawa in third.

First place in the third flight went to Pattie Magee, with Atom Irwin in second and Denise Stewart in third. Katie Heintz won closest to the pin.