156 players went through two rounds of medal play to make the cut for the top 64, who then went on to the match play rounds, culminating in a 36-hole final.

I watched Shannon Brooks, of Vienna, VA, play a good second round in medal play Aug. 2, to easily make the cut. Last week’s column discussed her first match, where she defeated a good friend, Anna Redding of Concord, NC.

In the Round of 32 held Aug. 4, Brooks faced Maria Torres, a standout golfer for the University of Florida. The Puerto Rican native had struggled to make the tournament due to flight problems from down South, but easily qualified for the match play rounds despite those travel challenges.

Brooks started off well, going two-up after three holes. She lost her advantage over the next two holes, largely due to her own miscues. Torres went 1-up on the par-5 ninth hole with an approach shot to 3 feet, easily making birdie to Brooks’ par.

Torres hit a powerful drive on the 18th, and made a great approach uphill to about 15 feet. Brooks tried to cut the right turn dogleg with her drive, and hit the trees instead. A good punch-out left her 155 yards out, and her third shot put Brooks on the green.

Torres ended Brooks’ tournament hopes, however, when her first putt finished 3 inches from the hole, winning the match.

“I’m a little disappointed that I didn’t win, because I felt like I didn’t play as well in the matches as I did in the stroke play rounds. I think I was a little rusty on my match play skills, and didn’t really play my own game at times,” Brooks said.

Brooks is now busy with her sophomore year at the University of Tennessee, where she plays on the women’s golf team.

This was the young Virginian’s first U.S. Women’s Amateur. It is not likely to be her last.

The recent days of drenching rain blew out a wide variety of scheduled Cape Region events, including golf fundraisers.

The Epworth United Methodist Church’s Drive Away Hunger Golf Outing was scheduled for Oct. 1 at American Classic Golf Club, off Postal Lane, but was postponed. The fundraiser will now take place Oct. 15.

As reported previously, the outing includes 9 holes of golf, lunch, games, prizes, and opportunities to bid in a silent auction.

Entry fees are $50 for walkers and $60 for riders. Contact Evans Shearon at 302-841-3072 for additional information and to participate as a player or donor. 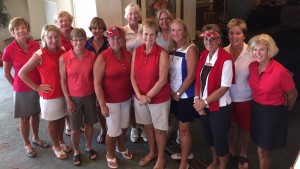 Getting it right the second time

A few columns ago, I wrote a piece about the Rehoboth Beach Country Club’s 2016 Solheim Cup team tournament results. Using the materials provided, I duly reported that the Heron Team defeated the Osprey Team by a single stroke.

That was not true, as it turns out. Now that I have the correct information, I’m happy to report that the Ospreys won the Aug. 10 tournament by 8 strokes, 539-547.

The Kings Creek CC Ladies 18 Hole group played a 3 Clubs and a Putter tournament Oct. 4. In this format, each player selects three clubs plus a putter to use during the round, removing all other clubs from her bag.

Tricia Ritthaler won first place in the first flight, with Ana Dittel in second and Sheree Davis in third. In the second flight, Debbie Grant finished in first, with Barbara Hines in second and Nancy Froome in third.

Nathalie McGregor won the closest to the pin contest.