Making the Finals, with a bonus

It has been 24 years since a woman has won the NCAA individual championship and the U.S. Women’s Amateur in the same year. That time it was Vicki Goetze-Ackerman, of Georgia. 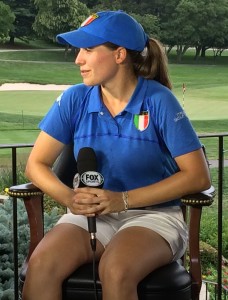 On Aug. 6, a crowd of avid golf fans at Rolling Green Golf Club knew that Italy’s Virginia Elena Carta had a great chance to be the next one, as her semifinal match loomed.

The Duke University sophomore had stumbled a bit in her first medal play round, but then played much better to make the cut and go through the first several match rounds. Carta’s progress toward this rare double victory in the same year continued in the semifinal, when she defeated Philippine teenager Yuka Saso 2 and 1.

Some aspects of this semifinal match were similar to Carta’s quarterfinal match against Maria Torres. These included Carta’s relative difficulty with the challenges of the front nine. She bogeyed the first hole to go one-down, but a nice birdie from 15 inches brought it back to all-square two holes later.

The match stayed even until the seventh hole, when Carta scuffed a recovery shot from the left rough. The ball skipped across the creek severing the fairway, but was still over 150 yards from the green for her third shot. Saso’s conceded birdie put her 1-up on the Italian.

The match didn’t return to all-square until the ninth, when Carta made a conceded par and Saso made bogey.

As in the Torres match, Carta pulled ahead on the 10th, again because of her competitor’s miscues. On the 12th, however, Saso made such a good recovery from a green-side bunker for par that Carta was admittedly rattled, three-putting to lose the hole and go back to all-square.

Both golfers scrambled for good pars on the difficult par-4 13th. Carta played better out of her bunker on the 14th than Saso did, going one-up. Carta’s par-saving putt was warmly applauded by the crowd, as was Saso’s par save on the 15th that kept Carta from winning the hole. The crowd also cheered for both golfers when they made pars on the sixteenth.

Carta played the par-5 17th hole masterfully. First she aimed her driver to enhance her chances to reach the green. Then Carta made a big swing with her 3-wood from 215 yards out, complete with a shouted “Come on!” as she tracked its progress. The ball bounded onto the green, rolling to a stop less than 3 feet away.

Saso’s drive was shorter than Carta’s, one of the very few times that happened all day. She could only reach about 50 yards from the green with her 3-wood, and struggled to par the hole.

Carta then nudged her ball to 3 inches, for the finally conceded birdie and the win.

“I think I kept myself composed the entire time,” Carta said. Even when mistakes occurred, such as on the twelfth hole, Carta reminded herself, as she did at the NCAAs, “to see bad things in a positive way.” She credited that advice with improving her focus for the remaining holes. Carta was especially pleased with her game-winning finish on 17: “That was really cool.”

Carta also reacted strongly when told that her semifinal win made her exempt into the 2017 U.S. Women’s Open, to be held at Trump National GC in Bedminster, NJ. “Really? Actually? Oh my God that is super cool!,” she said. “Thanks for the good news!”

The Delaware State Golf Association is once again holding its Frozen Fridays winter golf series at many courses throughout the state.

These events give golfers a chance to play different golf courses at a discounted rate, earning pro shop credits in the tournaments. DSGA membership is not required, and because the tournaments use Modified Callaway scoring, no handicaps are needed, either. The playing fee is $35, covering the golf, cart, and prizes.

Each tournament begins with a 10 a.m. shotgun start, and registration is open for each Friday until the Wednesday before. Sign-ups began Oct. 3, and spots are filling up.

The first tournament is at Newark CC on Nov. 4. Among Sussex County participating courses, Rookery North hosts the event Nov. 11, Heritage Shores GC is on Dec. 2, Bear Trap Dunes is Dec. 16, Rookery South is Jan. 6, and Baywood Greens is Jan. 13.