Virginia Elena Carta, of Udene, Italy, is a 19-year old Duke University sophomore and the reigning NCAA individual golf champion. She is also not immune to the stresses and strains of high-level competition, as evidenced during the 2016 U.S. Women’s Amateur at Rolling Green Golf Club, in Springfield, PA.

Fortunately, she has a great attitude, and the support of others on which to draw.

The attitude is displayed on her left wrist, if you look carefully. A tiny bracelet features a little disc on which this phrase appears: “il meglio deve ancora venire.” This roughly translates into “The best is yet to come”.

Carta needed that attitude during a tough match against Puerto Rico’s Maria Torres in the quarterfinals Aug. 5, their sixth round of golf in five days. Carta was trying to be the first woman to win the Amateur and the NCAA in the same year since Vicky Goetze-Ackerman did it in 1992.

Carta admitted she was “feeling a lot of pressure” and was “super nervous” as she began the round. An opening drive into thick rough didn’t help. Her next shot went “three yards,” she said, a mishit I hadn’t observed in prior rounds. Carta’s putt for double bogey was conceded after Torres made a conceded par.

The two swapped pars for two holes, and Carta seemed to relax and begin to play her game. It showed up on the par-4 fourth hole, where her approach shot landed past the hole and spun back to a foot away, for a conceded birdie.

She gave Torres the advantage on the very next hole, however, with a fairway bunker/green-side bunker miscue for another conceded bogey. Two sets of pars later, Carta gave Torres the par-4 8th hole. The Italian’s second shot stopped quickly on the green, and then rolled slowly back down the false front slope 45 yards away, where she couldn’t recover.

At this point, the smiling Torres frankly looked like she could win, and Carta looked rattled.

Then things changed–perhaps because Torres refused Carta’s suggestion on the ninth hole that they concede each other’s short par putts.

Carta made a nice drive to the green on the uphill par-3 10th. Torres’ ball landed on the green near the hole, but then bounced into a nasty lie in the rough beyond. Her bogey gave Carta the hole, and an opening Carta then exploited for four more holes in succession.

The NCAA champion birdied the 11th hole from 10 feet, and made a sharp fist pump as the ball dipped into the cup. Her long curling putt on the 12th to 1 foot was conceded for par, while Torres missed her par attempt. Despite her own bogey on the 13th, Carta won the hole because Torres faltered her way to a double bogey.

The Puerto Rican’s meltdown continued on the long, uphill par-3 14th, when she dumped her short-sided ball into the bunker between her and the green. Carta went 3-up.

Then Torres showed some real grit, with a great chip and a 7-foot par putt that Carta couldn’t match.

The breeze was in the golfer’s faces as they teed off on the 17th. Carta said later, “I couldn’t reach the green, [so] I aimed more right with my driver to hit that hole in three shots. I didn’t want to leave myself with a really short chip or something to the green. We calculated to go to 70 meters or so and that was the perfect match for me.”

It was the right idea. Her 5-iron landed 75 yards out, and her 54-degree wedge darted to four feet below the hole for an easy birdie putt, which she didn’t have to make.

Torres’ third shot, from 50 yards out, refused to spin back from 18 feet above the hole. When her birdie attempt rolled 12 feet past, Torres smiled and conceded the hole and the match.

Carta then broke down in tears, a reaction she didn’t expect. “All my emotions kind of went away. I was excited, but it was super, super tough,” she said. “It was more mentally tiring than physically tiring.”

She also credited Amanda Blumenherst with helping her prepare for the round against Torres. Carta met the former Amateur champion and Duke alumna earlier this year, and Blumenherst has given Carta the benefit of her experience.

Carta texted her that morning, and despite being busy with a wedding, Blumenherst texted her back “in five minutes.” As Carta explained, “She keeps me composed, and just having her as a friend, that’s awesome.” 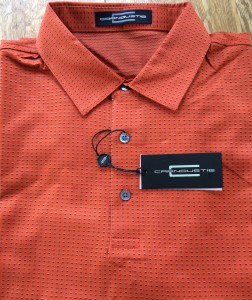 Carnoustie Sportswear recently sent me a sample from their Fall 2016 lineup of cotton golf shirts.

It came in very handy for my first round of chilly October golf this year, when the tee time temperature was about 55, climbing to 62 or so by the time we reached the sixth hole.

I am pretty well converted to performance fabrics for summer golf, but cotton shirts still feel a lot better when golfing in the Cape Region’s autumn sunshine.

I tried out the mercerized Cotton Classic Jacquard Polo, which featured a tiny repeating pattern on the warm orange background.

It looked great, he said modestly.

Carnoustie golf apparel is available at several Delaware pro shops, including Cripple Creek Country Club in Ocean View and Wilmington Country Club upstate. The new lines are also available at the company’s website, where the shirt I received is priced at $105.

Mary Mezger also won closest to the pin on the fifth hole.