More to the Mid-Amateur than Making the Cut

I spent the first two days of the 2016 U.S. Mid-Amateur Championship at Stonewall in Elverson, PA, with three golfers who didn’t make the cut for the match play rounds thereafter. 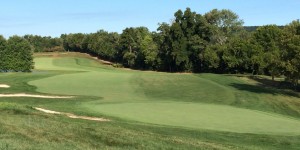 The par-5 third hole at the Old Course at Stonewall, looking from the hill beyond the green, toward the fairway.

Based on how they reacted to playing this national tournament, however, the results didn’t count as a failure.

Chip Lutz, 61, of Reading, PA was the 2015 U.S. Senior Amateur champion, and has a string of other amateur golf accomplishments to his credit. For Ryan Gale, 36, of Costa Mesa, CA, and Colton Knedler, 25, of Scottsdale, AZ, this was their first-ever USGA Championship.

To reach the Mid-Amateur, golfers must be at least 25, with a maximum 3.4 handicap index. In creating the tournament, the USGA recognized the dominance of collegiate golfers in the U.S. Amateur. It hoped to create a competitive opportunity for highly qualified golfers for whom golf remains an avocation, and not a potential professional goal.

With over 4,000 entries for this year’s championship, and 65 sectional qualifying tournaments in 43 states, I think the USGA succeeded. The field’s average age was 36.

With high heat and humidity the first day, and a 2-club wind in cooler temperatures the second, Stonewall challenged the entire field.

Lutz made the first birdie of the group on the Old Course Saturday, with a 110-yard approach to 3 feet on the 4th hole.

During the second round, the three players made 8 birdies, with 4 double bogeys and a triple bogey by Knedler that started his morning.

Each hit drives of 300 yards or more, sometimes but not always with the help of that 2-club wind.

Gale’s first double bogey on Sunday came when he drove into high fescue and again on his second shot on the 427-yard 4th hole, his 13th hole of the day. He then lost a ball in deep rough on the next hole, despite a diligent search by his playing companions and a few others. Naturally, his lost ball was found after the 5 minutes were up and he’d hit his third.

Lutz tried to putt through a few inches of greenside rough on the 478-yard 16th hole on Sunday, only to watch it pop and stop 15 inches away. He laughed out loud, but couldn’t convert either the par or the bogey attempt.

Knedler was usually the long hitter of the bunch. Unfortunately, his birdies were outnumbered by his bogeys, and worse.

Lutz admitted his game wasn’t as sharp as he wanted, or as it was when he won the Senior Amateur the year before. Here’s how he described his first round:

“I was hitting it great for the last couple weeks and then all of a sudden I’d be playing practice rounds and be like, what’s going on? So I got that back a little bit, and was steadier. Really I only had that one bad tee shot on 13, so I was pleased with my tee game, but the approaches weren’t getting to the right spots.”

The group’s Sunday finish, on the 166-yard 9th hole at the North Course, ended better than they might have hoped after their tee shots. Playing into the wind, Gale and Knedler’s tee shots landed in a front bunker well below the green. Lutz also went short, but into a grassy swale. Knedler and Lutz made par, and Gale’s par putt rolled 2 feet by for an eventual bogey.

The fact that this was the end of their tournament didn’t seem to bother any of them. Lutz agreed he was a little off his form, and thought he would benefit from a short break from competition before he set off to defend his Senior Amateur title later that month.

Gale said, “This is my first USGA event. It was a treat. I’m glad to have finally made one. It’s all that everyone’s talked about.”

“I tried [to qualify for the Mid-Am] a few times. I stopped trying a few years ago, just with the kids and what have you, and so this year there was a [qualifying] site I liked, shorter course back home, and made it.”

His 73 on Sunday was 6 strokes better than his first day. Gale said, “I think this course was a little easier than yesterday. I wasn’t nervous, just didn’t hit it well out there. Today was a bit more difficult because the wind was up the entire day, but this course, I think, off the tee suits my eye a little better than that [other] one.”

Knedler, who looks a bit like 2011 PGA Champion Keegan Bradley, remained excited to be there: “All in all, it was a great weekend and a great experience. USGA events are second to none, obviously.”

“It was still tough out there. I hit the driver well the whole weekend, which is normally my weak spot. I was hitting fairways out there, but wasn’t really hitting greens, and still haven’t figured out how to chip from the rough yet, so that was killing me.”

“Now I know what kind of shots I need in the bag that I didn’t have this weekend. It’s tough to re-create them out on the West Coast. We don’t really have rough like this, especially in Hawaii and Arizona, which is where I’m from and where I live. For the USGA Championship, they definitely grow it up,” he said.

None of these golfers displayed anything more than a fleeting bit of temper. Throughout both rounds, they encouraged each other, applauding good shots and commiserating over bad ones.

It was a pleasure to watch them play.