In golf, what happens on a particular hole usually means far more in stroke play than in a match play competition.

A double or triple bogey on a single hole can eliminate your chances to win in a stroke play event. However, match play scoring is based on how well you play against your opponent on each hole, without regard to how many strokes add up for the full 18-hole round.

Nonetheless, what happens on a given hole in match play can shift momentum, encourage risk-taking that sometimes pays off, and otherwise reward a certain nimble quality that some golfers display better than others.

I watched many of these match play moments during the 2016 U.S. Mid-Amateur Championship, held at Stonewall Golf Links in Elverson, PA. Here are a few of them.

In the Round of 64, Joseph Ida of Overland Park, KS faced Michael McDermott of Bryn Mawr, PA. McDermott was a bit of a local favorite, not least of which because of his prior appearances in over fifteen USGA championships, including 5 U.S. Amateurs and 8 Mid-Ams. The St. Joseph’s University grad is also a multiple winner of the Philadelphia Amateur and Philadelphia Mid-Am.

This was Ida’s first USGA event, but it wasn’t his first exposure to big-time golf. The 2010 Kansas State grad played for the Wildcats golf team with the PGA Tour’s Robert Streb, and spent a few years playing professionally before regaining his amateur status.

Their Sept. 12 round began with pars on the first hole, with McDermott going 1-up on the second. The lead shifted back and forth, until McDermott went 2-up on the 15th hole. At that point he looked good to finish the match in short order. Ida then showed that he thought otherwise, while McDermott started looking a bit shaky as the prospect of winning the match drew near.

On the 16th, a long par 4, Ida’s drive put him 237 yards out, in the right rough. His second shot landed just left of the green, 75 feet from the hole. McDermott’s drive went left, and finished just off an unpaved cart path and up against a 3-inch wide, very flat stone between his ball and the green. The rock could not have been more than an eighth of an inch high, but that was enough to stymie any kind of normal swing.

McDermott looked carefully, but there was no way to move the rock without earning a penalty stroke, and he was still 229 yards to the green. His thinned 5-iron thudded the ball downhill, 120 yards out.

Ida chipped to 5 inches for a conceded par, and McDermott saw his lead drop to 1-up when his par attempt slid by. His lead remained 1-up after the 17th, however, keeping McDermott’s hopes up for a closeout on the 18th.

McDermott drove into thick fescue right of the fairway, giving Ida an opening. The Kansan took it, hitting his drive into the fairway 169 yards out. His second shot landed 22 feet from the hole, and Ida’s lag putt finished a foot away for a conceded par.

McDermott hit a fine recovery to the closely mown grass left of the green, 25 yards left of the hole. However, his par attempt from 8 feet away missed, so the two players went to extra holes for a sudden death finish.

The need to keep playing seemed to inspire both men. The 507-yard par-5 19th hole (hole number 1) played both uphill and into the wind. It didn’t matter.

McDermott hit a 298-yard drive in the fairway, and a second shot from there to the green, 22 feet above the hole. Not to be outdone, Ida’s drive finished 242 yards out, and he hit two good shots from there to reach the green in three, 21 feet away from the hole. McDermott’s eagle attempt fell three feet short, and then he watched Ida make birdie. The Pennsylvanian then made his own birdie, taking the game to the next hole.

Then it was Ida’s turn to become a little nervy. On the 427-yard par 4 20th (hole number 2), he drove into an ugly lie in the left rough’s fescue. McDermott’s drive finished near him, but in normal rough only two feet from the edge of the fairway. McDermott’s second shot from 169 yards finished 20 feet from the hole.

Ida took a big swing, but the ball didn’t cooperate. It landed in a bunker 55 yards out, and his next one put the ball 45 feet from the hole. His par putt rolled 5 feet past. McDermott finished the round with a lag putt to 3 inches for the conceded par and the victory.

More match play stories from the Mid-Am will appear in upcoming columns.

The second time is even more charming, especially when it’s a copy of the original 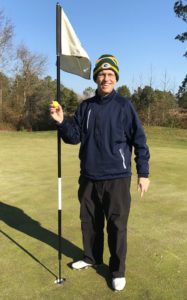 Jim Klinedinst, proud maker of his second ace–made on the same course, same hole, same yardage, same club, and same kind of ball, nearly two years after the first one.

In early 2015 I wrote about Jim Klinedinst’s first hole in one, which he made Feb. 4 on the par-3 13th hole at the Lighthouse Sound course near Ocean City, MD.

Darned if he hasn’t done it again.

Playing on Dec. 28 with his regular gang from the Mariner Bethel UMC Church “Hackers” group, Klinedinst pulled the same Big Bertha 6-iron for the shot, set to the same 139-yard challenge.

He hit a used Srixon golf ball, the same type he played for his first ace.

Pastor Steve Ackerman was there to witness both aces–showing once again that Someone Up There has a sense of humor, as well as more than a trace of the divine.