Rain delays cut into the post-spring break schedule for the Cape Henlopen Viking golf team forcing one match into mid-May. The squad traveled to Hooper’s Landing April 27 for a re-scheduled match against Seaford, however, defeating the Blue Jays 177-241.

Matt Zehner won medalist honors with his 39, while Nolan Brown and Saxon Kalb tied for second best among the Vikings with 45. Jason Saldona completed the varsity score for the team with his 48.

Cape head coach Chris Krueger said, “I really like the depth of the team, rotating new players each week, and challenging them to stay in the rotation. All players are working through swing corrections and still producing.”

The popular Harry Derrickson Meals on Wheels Tournament is set this year for September 25 at Rehoboth Beach Country Club.

The early bird special for the event expires June 1. Individual spots can be obtained for $150 and foursomes for $560. The fees cover golf, cart, a light lunch, beer on the course during the round, and the awards ceremony.

For more information, go to mealsonwheels-lr.com, or contact the Meals on Wheels Office at 32409 Lewes-Georgetown Highway, or call 302-645-7449. 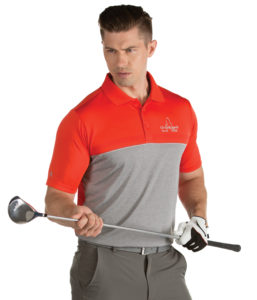 Antigua Shirts are extremely popular in the Cape Region, with logo versions at most of the area’s golf courses.

Several ago I tested a few Antigua shirts sent to me for review. The technical fabric performed successfully in high heat and humidity, as long as there was a slight breeze.

When I met Antigua Vice-President Pamela Miller at the 2017 PGA Merchandise Show, she said Antigua made great improvements in their fabric designs since then.

Miller discussed the fabrication process for their Desert Dry line, noting the “stretchability” and moisture wicking built into the shirts.

The collar for the Unite design is made from the same fabric, a step away from a previously ubiquitous knit collar. To add interest, a contrast color is placed on the inside back yoke.

Miller oversees customer service and operations for Antigua, so we talked about the logo process for golf club and resort clients. Her staff works with the shirt designers to make sure the print designs work with the logos embroidered on the chest, for instance by engineering a horizontal line into a better position.

Antigua also uses its coordinators to make sure the 3-color schemes used for the logos are either in good contrast or complementary to the shirt fabric.

She showed me a sample from Pinehurst, where the grey portion of the Putter Boy’s bag had to be shaded a bit lighter than the shirt to make it look better.

There are still some playing spots available for the Children’s Beach House charity golf event, set for May 25 at The Peninsula. I wrote about this great Cape Region tradition in the March 17 column.

The Kings Creek Ladies 9 Hole Group played a “Baker’s Dozen” game April 26, in which the players’ best 5 net scores counted, with no tiebreaker.

Deb Ward won the first flight, with Anita Pettit in second and Lisa Schofield in third.

Sheree Davis took the second flight, followed by Nancy Froome and then Sheree Mixell. Davis also won the closest to the pin contest, at 10 feet 2 inches.

Yona Zucker won the third flight, with Nan Martino in second and Leslie McClintock in third.

Hazel Pusey was first, with Nancy Rialle in second and Susan Shockley in third.