The Cape Henlopen High School golf team continued its fine 2017 season with a double victory May 15 at Rehoboth Beach Country Club. The Vikings defeated the Royals of Delmarva Christian, 172-214, and the Smyrna High Eagles, 172-224, in sunny but windy conditions.

Matt Zehner won medalist honors with a two-over par 38. “I had two birdie lip-outs and one eagle lip-out on the ninth hole,” he said.

Dane Palmer’s 42 was another sign of progress for the sophomore. “I played pretty well today. I didn’t have any double bogeys, and parred [Hole Nos] Two, Four, Seven, and Nine.”

Nolan Brown shot a 45 for the Vikings’ third spot, while Saxon Kalb and Michael Bollig tied for the last scoring position with 47s. Kalb said, “I had some good pars, and I was driving and putting pretty well. My chipping wasn’t great.”

The Vikings hosted Sussex Academy May 16 at Kings Creek Country Club, where the challenging course took its toll on both teams, as Cape won 176-203.

Zehner won medalist honors again with his 39. “I had one bogey and one double,” he said, with the double coming on the par-5 7th.

Academy coach Mike Loftus is pleased with his very young squad’s season-long performance, nearing a .500 record in only the second year of its existence. 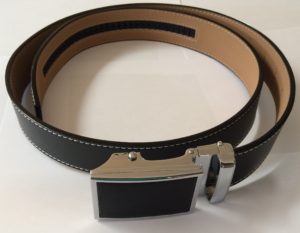 One of the Nexbelt Golf Series models

The folks at Nexbelt sent me a new Golf Series belt to test and comment for this column.

The belt has, as they say, No Holes. Instead, it uses a gear arrangement, set ¼ inch apart, that slides through the buckle and locks in place where needed. A release lever on the underside of the buckle makes it easy to adjust or remove the belt.

I like these types of belts because, to put it bluntly, my body is currently “in transition.” The usual one-inch space between belt holes doesn’t always work so well out on the golf course.

Having a belt that fits me snugly while walking or bending down to retrieve a golf ball from a hole is a nice benefit, not just for me but also for my playing companions—at least, that’s what they tell me. 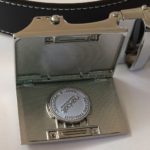 A ball marker is kept in a hidden compartment in the buckle.

The Golf Series belts come with a ball marker in the buckle, retrieved by flipping the front cover down. I tested other ball markers in addition to the one that came with the belt. The non-magnetic ones fit just fine. Magnetic markers might not want to stay in the molded slot, however.

The belts retail online at nexbelt.com, in a wide variety of styles and colors. Many men’s designs sell for $49.99 SRP, while some of the women’s golf belts sell for $39.99 SRP.

The Eastern Shore Chapter of the EWGA is inviting Cape Region women to take part in the organization’s busy 2017 roster of activities.

With over 300 members, the Chapter has eleven different leagues, including an evening hours Sunset League for working women, a New Golf/Refresher League, and several 9- and 18-hole leagues. Wednesday Golf Socials are held on the second Wednesday of each month at popular courses such as Lighthouse Sound. In addition, the EWGA has arranged for clinics at Bear Trap and other layouts.

For more information, visit ewgaeasternshore.com, or contact Judy Kight at 410-591-9291 or by email at judykight1968@gmail.com.

Lesley Corydon won the first flight, with Tina Brown in second and Jeanne Drake in third. Brown also won closest to the pin on the 16th hole.

Rosemarie Schmidt won the second flight, with Mardee Corbett in second and Pat Devoll in third.

The Sussex Pines Ladies 18-Hole group played a Mutt and Jeff event, in which the low scores for the par 3s and 5s are used.