Time to try a new driver?

The middle of the golf season is actually a good time to try out new golf clubs.

Your swing is probably as stable as it can be, and should be a good indicator of whether a new driver or iron can really help your game. And despite some shrinkage in the market, there are still plenty of club options out there.

I thought this series was a genius move by the folks at Wilson. When I said the same thing at the 2017 PGA Merchandise Show to Rich Hulock, the Wilson manager for metal woods, he quickly laughed and agreed. 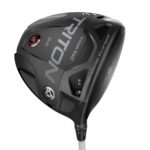 The new Triton driver, from Wilson

The competition ran from February 1 to the day after Thanksgiving, according to Hulock. That covered the time needed to review the submissions, select which contestants to stay and which to drop, make the prototypes, and reach a final decision in time for production and shipping for the upcoming 2016 holiday season—which just happened to coincide with the grand finale on The Golf Channel.

The winning entry, the Triton, uses a combination of adjustable features. Hulock said the design was “unique from an engineering perspective.” In addition to screw-in weight ports of 2 or 6 grams, the Triton offers two types of sole plates, shaped a bit like a skate or stingray.

The titanium plate weighs 22 grams, and the carbon fiber plate weighs 9 grams. The interchangeable plates are secured into the driver with the weights. The Fast Fit Hosel system also gives players the ability to dial in a loft setting of +/- 1 degree. On the top of the club head, an alignment guide the same width as a golf ball extends for the head’s full length.

Hulock said one of the most challenging engineering elements of the Triton design was to figure out how to withstand the different forces that the two soleplates would create, while also providing a safe method to secure the plates to the head.

The new driver comes with with a wrench, the two soleplates, and a fitting guide. Buyers who work with their club pros have a choice of 10 different shafts in ordering the club, with no upcharge.

I could really feel the weight difference in the Tritons, and that variation also showed up in the launch monitor. I did not hit the titanium Triton very well, however. There was some improvement with the carbon fiber Triton, but I still couldn’t match its launch monitor results with my Ping G30.

Once I tried the D300, however, which felt much lighter than either Triton design, my monitor numbers matched what I can do with my Ping.

Your results may vary, of course.

As my experiment shows, it’s important to test any new driver against your current swing before making the investment. Your club pro can help you with that process. 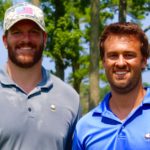 The other flight winners for the popular event also included the following:

Carolyn Horn won the first flight, with Sue Nardo in second and Jeanne Drake in third.

Gail Petren won the second flight, with Rosemarie Schmidt in second, and Susan Gaughan in third.