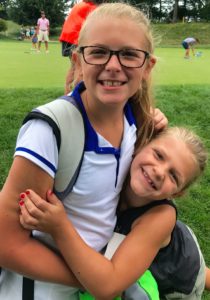 Sawyer Brockstedt being hugged by her biggest fan, her 8-year old sister Hudson.

Sawyer Brockstedt is heading to Pinehurst, NC and from there, perhaps to Augusta National for the finals of the national Drive, Chip, and Putt Championship.

The 10-year-old Rehoboth Beach resident qualified in the subregionals at Applebrook Golf Club in Pennsylvania on Aug. 8. She now goes to the regional qualifier at Pinehurst Sept. 3.

According to her father, Chase Brockstedt, Sawyer “did not have her best day.” Her putting and chipping scores were not quite up to her usual standards. However, she scored well in the driving part of the contest, and her combined total earned her one of the regional spots.

It’s understandable that Sawyer’s play at Applebrook was a bit off, considering her competitive schedule in the days leading up to the subregional.

She finished first gross in the first flight at the two-day, 36-hole Kings Creek CC club championship on Aug. 6, her first-ever tournament of that length. As soon as she finished at Kings Creek, the family left for Eagles Landing Golf Course in Berlin, MD, where that Sunday afternoon she won an Eastern Shore Junior Tour 9-hole contest.

Returning to the Cape Region, she then played and won the Rehoboth Beach CC junior championship on Aug. 7.

That is a pretty heavy competitive schedule for anyone, and especially for a 10-year old.

Let us hope she is well rested for Pinehurst.

Congratulations to Chris Krueger, head of instruction at Kings Creek CC, for his second place finish at the 2017 Delaware Open on Aug. 8.

At Bear Trap Dunes, Krueger tied with amateur Walter Eglof in regulation play, but lost a three-hole playoff. Krueger finished first among the pros, however, winning $2,700.

The Kings Creek CC Ladies 9-Hole group played a team “2, 1, 1” game Aug. 9. The two best net scores are used for par 3s, and one best net score is used on the other holes.