The skills challenge at Rookery South continues, as players try to win an Odyssey putter by placing their tee shots within a grip length of the hole on the par-3 ninth. If no one wins, a drawing is made from that month’s participants.

The contest continues this fall, including the discount coupons for local businesses for those who participate.

As the golf season winds down, now is a good opportunity for Cape Region golfers to have their clubs re-gripped.

Old, worn-out grips are often slippery, forcing the golfer to hold the club tighter to keep it from flying down the fairway. However, a tight grip wreaks havoc on maintaining an effective golf swing—even for the putter.

The folks at TourMark Grips, of Salem, SC are happy to help your pro find the right grip for your clubs, especially if you also like to have a little fun. In addition, the company’s grips are sold at major retail outlets such as Golf Galaxy, Dick’s Sporting Goods, and Walmart.

The company makes grips for Loudmouth Golf, in the same wild color and print schemes made famous by that apparel company. Club grips retail for $9.99, while putter grips sell for $16.99 for regular size and $19.99 for the oversize variety. 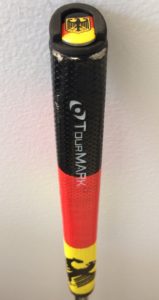 The TourMark Germany putter grip, with a magnetic ball marker slotted into the end cap.

If you like to show off your team or school colors, you probably will be buying a TourMark grip. The oversize putter grips come in a selection of over 150 teams, from the NFL, MLB, NHL, and NCAA (but not the University of Delaware, a real oversight in my humble opinion). There are also grips for the Army, Navy, Air Force, and Marines, along with over a dozen Country grips, often in either regular or oversize.

The company also does custom grips for events or companies, such as Budweiser or Ricoh.

Wallin also showed me the magnetic end cap, including a patented retaining wall, into which a design-coordinated ball marker is inserted and easily slid out when needed.

He sent me a Germany putter grip, and the pros at Rookery South put it on my backup putter. The grip is the stock size, in the colors of the current German flag. The ball marker fits snugly in the end cap, with a miniature German eagle in front of the black, red, and yellow background.

The grip is nicely soft and cleans easily. The ball marker was surprisingly handy, and its bright colors contrasted well against the green turf.

The scramble format event has a shotgun start at 9 a.m. The entry fee of $90 per player/$360 per foursome includes greens fees, carts, lunch, door and raffle prizes, and beverages.

The Delaware State Golf Association held its Mid-Open Championship Sept. 18 at the Bayside Resort course near Selbyville, DE. Qualifying amateurs needed to have at least an 18.0 handicap index and be at least 30 years old.

Ed Brown of Rehoboth Beach Country Club tied for 20th place with his 81 on the challenging Nicklaus layout.

The Kings Creek CC Ladies 9-Hole group played an individual “Tee to Green” game Sept. 20, counting only the strokes made from each tee to each green.

Carolyn Horn won first place with Sandy Neverett in second and Sue Eisenbrey in third. Neverett also won closest to the pin on the eleventh hole.

Donna Deely took first place in the first flight, followed by Katie Heintz in second and Judy Wetzel in third.

Nancy Froome won first place in the second flight, with Kathy Casey in second and Sherry Pie in third. Pie also won closest to the pin on the 8th hole.

Sheree Mixell took first in the third flight, with Vicki Martina in second and Pattie Mageee in third.